‘Hoarse-voiced Nobby Stiles met Rangers’ manager Tommy Docherty outside the dressing rooms minutes after the game and said: “It was like the Alamo for a spell there in the second-half.”

Stiles, whose side have drawn at both Newcastle and Sunderland, reckoned Rangers the best team Preston have met this season – in the second-half.

While ragged Rangers were left rueing a series of close-range misses, Stiles complimented his side on their discipline and work rate and admitted: “We were a shade lucky.”

The brutal fact for Rangers, unbeaten now in nine games, is that this was a point gained before a disappointing 14,316 crowd rather than one lost. 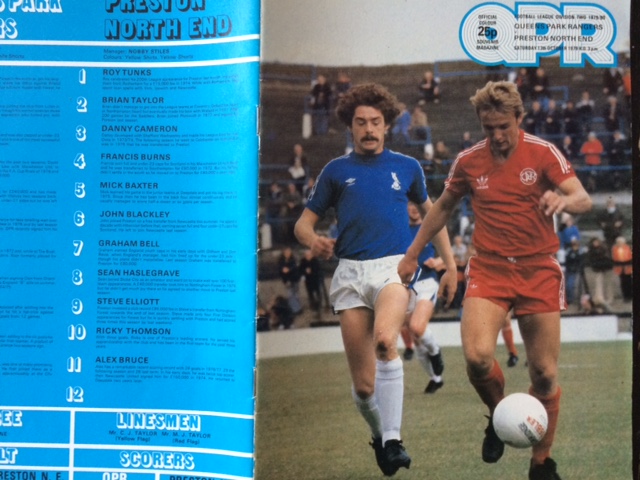 Stan Bowles watched by Rodney Marsh, his predecessor and the idol of the Shepherd’s Bush fans, had a disappointing match. Marsh, who returns to the US next week, said: “It was pretty poor stuff, I’m told I came on the wrong day.”

Clive Allen, who had scored in five previous home league games, needed one goal to equal Marsh’s record of six in a row, But the 18-year-old striker, despite persevering to the end when Roy Tunks held his last-minute shot, could not find the target.

A couple of sloppy defensive mistakes by David McCreery and Don Shanks, let in Ricky Thomson for Preston’s 22nd minute goal. Thomson saw Chris Woods off his line and brilliantly chipped the ball over him.

Paul Goddard got the equaliser six minutes later when McCreery headed on a Steve Burke corner.

Rangers brought on Republic of Ireland international Mickey Walsh for Steve Burke after 62 minutes. By then, though, they should have wrapped it up.

Bob Hazell slammed an easy chance over the top a minute after half-time from seven yards and Glenn Roeder headed over from close range.

Roeder, who had scored in the two previous games after moving into midfield to accommodate newcomer Steve Wicks, headed over again from close in when Allen provided another chance.

Allen, just over the top with one shot, and just wide with a header from Roeder’s cross, had a good chance when Hazell sent him clear. But he slammed the ball against the outside of the post – with the unmarked Goddard waiting by the other upright.

The R’s suffered a 0-3 defeat at Roker Park the following week.