On 28th August 1943, the R’s travelled to Stamford Bridge for their opening Football League South match of the season.

It was noted in the programme that: ‘In the event of an Air Raid Warning the Ground exits will be opened, so that those who wish to leave can do so. Play will proceed unless enemy activity is reported in the vicinity.’ 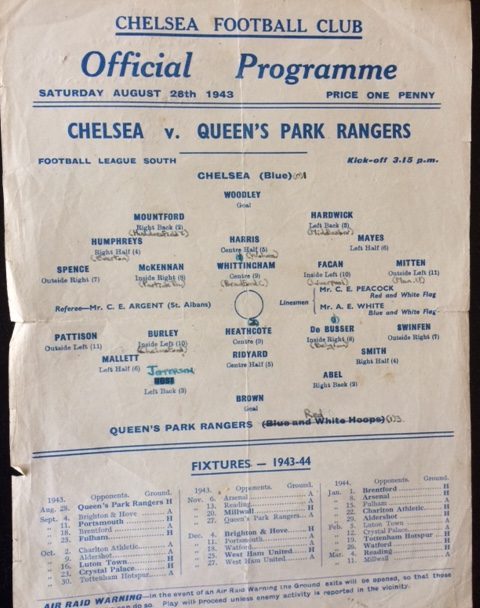 ‘Queen’s Park Rangers started the season well by a brilliant victory over Chelsea at Stamford Bridge by 3 goals to 1. Heathcote (2) and the Belgian, De Busser, were the scorers.

It was only in the last 15 minutes that the Rangers took command and excitement was intense, as first they equalised, and then went ahead.

A great double was served up, as the QPR Juniors trounced Hoovers at Loftus Road by 5 goals to 0.

On Saturday the Rangers hope to be unchanged, although De Busser is suffering from the effects of a damaged ankle. A hard game should result, as the famous Spurs are the visitors to the Bush.’

It was noted in the programme the following week that: ‘We had to fight hard to beat a good side at Chelsea last Saturday; our goals were scored by Heathcote (2) and Emuiel De Busser.

Emuiel was unfortunate to injure his ankle after 20 minutes play but showed splendid courage in carrying-on when he was obviously in great pain; this Belgian boy looks like making the grade.’

The R’s followed up this victory with a 1-0 win over Tottenham at Loftus Road.

(Thanks to Colin Woodley for the newspaper article. The programme is from my collection)