On 22nd September 1906, the Rangers took on Millwall at the Agricultural Showground, in a Southern League (Division One) fixture. A match report appeared in the Woolwich Gazette the following Friday:

‘A capital attendance witnessed the meeting of these old opponents on the Rangers’ ground at Park Royal on Saturday.

The game proved a rousing struggle, in which both sides gave a good exhibition, and the home club won by two goals to one.

The Rangers began operations, and immediately the Millwallleft-wing appeared likely to come through, but offside spoilt the effort, and a shot by Jones went astray.

The Rangers’ opportunity soon came as a pretty piece of work by Blake ended in his hitting the post. Play for a time became of an even description until Howe had a hot shot to save from Twigg.

Hereabouts Aitken was showing good form, several times clearing his lines well. Millwall possessed a chance when Hunter centred, only for Jones to try a tame shot. Ryder also was in error just afterwards, while Brown sent over the bar.

Ryder, however, tested Joyce with a shot that he only just saved from under the crossbar.

The Rangers were now attacking freely, and Blake succeeded in drawing Joyce out of goal. O’Donnell received and shot into the net before Joyce could return. 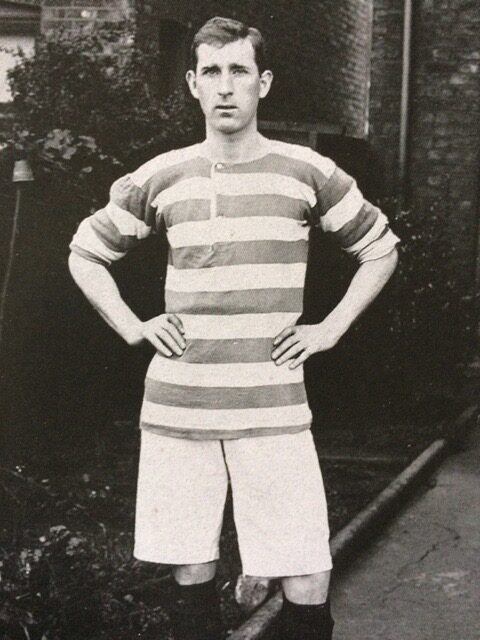 Re-starting, the Rangers attacked early, with the result that a corner came to them. Nothing resulted, but in three minutes Ryder was the means of scoring from close quarters, and the home side were two goals ahead.

Subsequently Hunter headed in for Millwall, but offside was given. Excellent defensive work by White, whose tackling was clever, stood his side well.

Now came Millwall’s opportunity, but Hunter failed from a good position. Smart play by McLean led up to Joyce saving when on the ground. The Rangers came again, only to meet a strong defence.

Just before the close Hunter shot in, and Howes threw out, but the referee ruled it a goal.

This was the Royalists third season at the Park Royal ground. Admission charges for the season were fixed at 3d for adults and 1d for children.

Shown above is the scorer of the Rangers’ first goal, Dennis O’Donnell. Dennis was signed from Sunderland in May 1906. He went on to score seven goals in his 27 appearances before being transferred to Notts County in 1907.

QPR travelled to Clapton Orient the following week and suffered a 0-3 defeat.

(Thanks to Colin Woodley for uncovering the match report)