There were at least three team corrections to the match programme. United’s left-back, Geoffrey Bent must have replaced Roger Byrne as he’s mentioned in the report below. Also Ray Marno informed me that his copy of the programme notes two changes for the R’s:

(Geoffrey Bent, Duncan Edwards and Tommy Taylor were to tragically lose their lives four years later in the Munich air crash. Although Johnny Berry and Jackie Blanchflower did survive the disaster, they never played again)

Rangers took on Manchester United on Monday, 29th March 1954 in a benefit match for Reg Allen. The following match report appeared in the West London Observer later that week:

‘In this benefit match for Reg Allen, the United and ex-Rangers goalie, a crowd of 15,528 turned up at Loftus Road, on Monday, to see the home side beaten comfortably by four goals to one.

During the course of the game, there were three own goals, two on the Rangers’ side and one on the visitors’ side.

There was little to choose between either side, but the first real chance fell to the Rangers when Clark presented Smith with the easiest of chances in the 18th minute, yet somehow, he shot clean over the bar.

Five minutes later Cameron almost put the home side ahead with a shot from just outside the penalty area, but Crompton made a brilliant save.

United took an unexpected lead following a free kick; Angell heading past his own goalie in the 20th minute.

Six minutes later Rowley, United’s outside-left, increased the lead with a shot that left Brown helpless. United were well on top and their defence was having an easy time against the Rangers’ lifeless attack.

Manchester United were presented with another gift six minutes before the interval. This time Taylor deflected the ball into the net after Berry had made an excellent run on the wing before cutting in to shoot.

On the resumption, United eased up and this gave Rangers more of the game, but they still lacked punch, only Clark being prominent with deft flicks to his inside men who, however, were only conspicuous because of their absence up front.

Rangers were given quite a few chances, and a little steadiness might have brought the desired result.

Towards the end, United exerting more pressure, came back into the picture and three minutes before time, Violett completed the scoring.’ 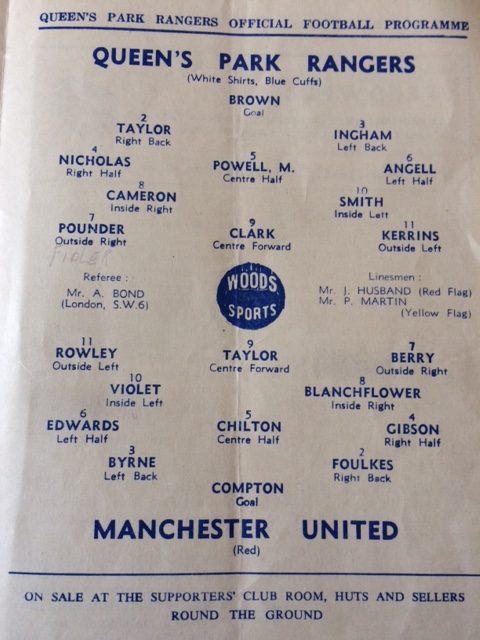 The following match home programme reported: ‘Well done QPR Supporters! – As a result of the collection taken on the ground last Monday evening in the occasion of the Reg Allen Benefit match, plus receipts from the P.O.B. competition and raffle held, it is with some pride that we are able to announce that we shall be able to hand over a cheque for no less than one hundred guineas for the parent club for the Reg Allen Benefit Fund.’

It went on to thank everyone who assisted with collecting boxes, including the Ladies Section and ‘the grand old supporter in blue and white regalia’ who toured the ground, and other friends of ours.’

‘Special mention perhaps should be made of Mr. D. Ewins of 205, Droop Street, W10, who was responsible for presenting a beautifully embroidered duchess set in club colours as a prize for the raffle. Thank you, Mr Ewins.’

A net balance of £1,472 1s 9d (equivalent value today is around £40,000), soon became available to create a fund for Reg who was undergoing medical treatment. A panel was set up to administer the fund, which included Rangers director G. Wodehouse, a Manchester United director, plus a member of the FA Council.

The Club also reproduced a letter received from Reg:

Dear Sirs,
May I take this opportunity to thank you and the players for playing a benefit on my behalf.

It only seems a short while ago that the actual game was very nearly a semi-final.

Knowing the players and abilities of both clubs, I’m sure the game was very entertaining.

Thanking you all once again.

Yours very sincerely,
R. A. Allen

He went on to make 255 first team appearances before moving on to Manchester United in June 1950 for what was then, a record fee for a goalkeeper.

Sadly, there were reports that Reg had become ill and he played his final game for Manchester United on 4th October 1952.

He continued to have health issues throughout his life. Reg passed away on 3rd April 1976, aged just 56.

(Thanks to Colin Woodley and Ray Marno for their assistance. The programme is from my collection)