Rangers opened the 1890/91 season on 11th October with a friendly against St. Bartholomew’s Hospital.

The following week a match report appeared in the West London Observer:
‘Played on the ground of the former in the presence of a good assemblage. Mr Morris winning the toss, elected to defend the Kensal Station goal.

St. Bartholomew started the ball at 3.30 and after a little give-and-take play, the home forwards carried the ball to the vicinity of their opponents’ goal, and from a centre by Druett, J.Truth headed the first goal.

On restarting, the medicos came with a rush, but T. Saunders was equal to the occasion, and cleared in fine style.

Some pretty passing by Teagle, Truth and Morris now ensued and resulted in Truth centreing to Morris, who headed a second goal.

The ball being played from centre again, Druett and Weller were instrumental in taking it down, the former passing across to Teagle, who passed to Morris, and the latter shooting the ball once more between the uprights.

Some all-round play was now shown by both sides, confined to midfield, till the whistle sounded half-time, and the players proceeded to the pavilion for refreshments. 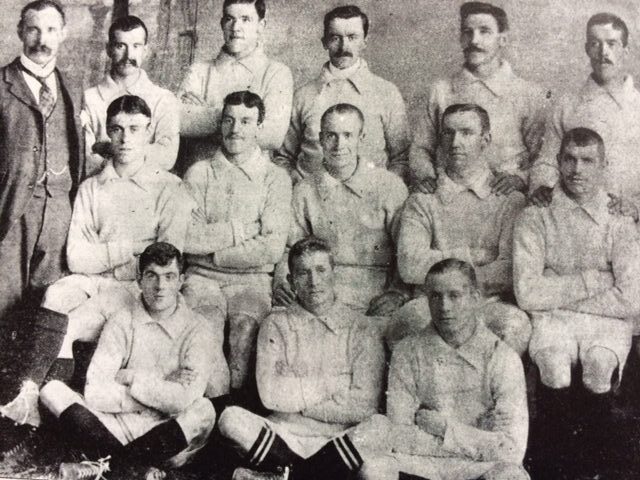 Morris kicked off from centre, but St. Bartholomew soon got on the ball and started away, and after some good play, the Rangers’ halves prevented them from scoring, and transferred the ball to the other end, when Weller scored the fourth goal.

The “Barts” now made a determined effort to score and succeeded in passing the halves and shooting at goal, but Schneidan was there, and fisted out in grand style.

Again, they made another ugly rush, but the home halves prevented all danger, and passed the ball to their forwards, and from a “melee” in front of goal, it was sent through, making the fifth goal.

The Rangers still kept up the pressure, and Morris scored two more goals. The medicos tried all they knew, but the Rangers’ defence was too sound to be beaten, and the call of time found the Rangers winners by seven goals to nil.

The home forwards showed some pretty passing at times, and Teagle sent in several searches and was unfortunate in failing to score.

Too much cannot be said of the halves, who played a sound combined game, feeding their forwards in good style. The backs were as safe as houses and Saunders made several fine kicks; Schneidan in goal was, as usual, perfect, what little work he had to do was done well.’

It was also noted that: “Queen’s Park Rangers are drawing some good gates at their ground. Admission 3d. Their fixture card would be acceptable.’

And that: ‘The Queen’s Park Rangers’ forwards are a long way in front of any other West London Club this year, their passing being grand.’

It is recorded that at the time Rangers were still based at the London Scottish Ground, Brondesbury and interestingly, the above report states that the match took place by Kensal Station!

Three weeks later, Rangers’ first competitive match against Tottenham Hotspur in the 2nd round of the London Senior Cup was played at Brondesbury.

Due to the state of the pitch, home games for the second half of the season were played over the river at Barn Elms.