‘There must be something about the air that does something for little John McSeveney, Hull City’s inside-right, when he visits London. He was the Tigers’ hero at Watford last Tuesday, with a point-snatching goal eight seconds from the end.

He got that goal after a blatant miss earlier in the game. He did the same against Queen’s Park Rangers at Loftus Road today.

In the 15th minute, he slammed the ball against the bar when he had only the keeper to beat, but in the 49th minute he headed a beauty to put the Tiger’s ahead.

In the 70th minute, however, Francis put QPR on level terms, with a rather fortunate goal, and this was the signal for a fast and furious finish of hectic football to contrast with the more skilful play that there had been earlier.

City fielded the same side for the sixth successive game, but Rangers, after their 6-2 win over Halifax last Monday, had to bring in George Francis at centre-forward because Bernard Evans had not recovered from a thigh muscle strain.

An early raid by City was checked because Chilton was trapped offside and for a while both attacks tested out the opposition’s defence, without a great deal of success.

Both defences looked solid in the face of some neat attacking football, but for a while the attacks had to contend themselves with long-range shots, Clarke putting one in for the Tigers and Towers replying for Rangers.

A drive by McClelland went behind the goal after his centre had been headed clear, and then Towers inspired two moves which brought more chances for the outside-right.

First, he set up a fine chance by driving through the inside-left position in a quick burst and, suddenly changing direction across-field. McClelland’s drive from just outside the area grazed the bar as it went over.

Next, Towers burst down the left-wing and swung the ball across from the dead-ball line. Fisher palmed it out and it went straight to the right-winger, but Garvey stepped in with his tackle before McClelland could try a shot.

In the 15th minute, McSeveney had a great chance to put the Tigers in front. A high lob by McMillan was punched out by Drinkwater, but it went loose to McSeveney, who had all the goal to shoot at from only about 15 yards out. His drive hit the underside of the bar and came back into play.

Next Bulless sent Chilton through with a perfect pass and the centre-forward hammered the ball in from a narrow angle, and all Drinkwater could do was to palm it across goal.

With Clarke rushing in, Rutter passed back to the keeper only a yard from the goal-line. The keeper, however, just grabbed the ball as Clarke darted in.

Rangers hit back with a couple of quick corners, but it wasn’t long before the Tigers quick, well-planned attacks were pinning Rangers down again.

The Tigers won their first corner in the 35th minute and Drinkwater did well to hold a nasty, curling flag kick from McSeveney.

A header by Bedford from a centre by Towers nearly caught Fisher on the wrong foot, and he dropped the ball, but there was no-one on hand to force it home. Almost the same thing happened at the other end after a great run by Crickmore.

Drinkwater pushed out the left-winger’s centre and before Chilton and Clarke could get to the ball, Ingham stepped in to clear it.

The Tigers had given every bit as much as they got in this hard but skilful game, and with a little more accuracy around the goalmouth, could have had a handy lead at half-time.

Although Rangers had not looked so attractive in midfield, they too had their moments in front of goal and, on balance, it was just that honours were even at half-time. 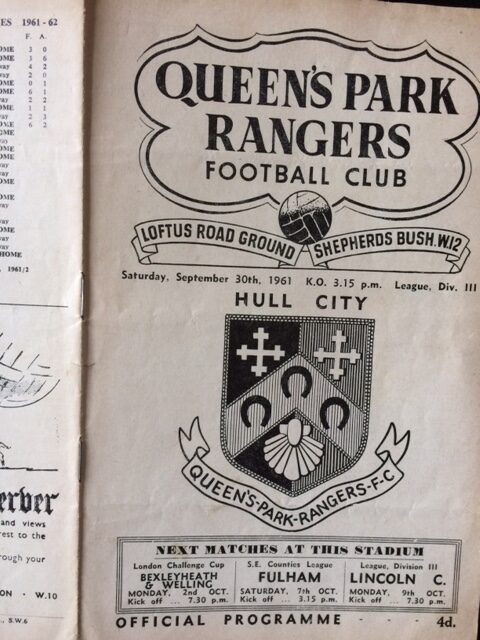 At the start of the second-half, McSeveney was right in the middle of the picture three times within four minutes of the re-start, and on the third occasion he put the Tigers ahead.

First of all, a dangerous burst by the little inside-right forced Rangers to concede a corner as the safest way of relieving the danger. Next, he tried a first-time drive at the end of an attractive City raid and almost caught Drinkwater by surprise.

The keeper however, flung himself full length and saved one-handed, but he had no chance in the 49th minute when McSeveney put City ahead.

Rangers might have equalised in their very first raid after this for they were awarded a free kick out on the left-wing, and when Barber swung the ball across, Fisher missed it and it went straight to Towers, whose header went over the bar.

Soon afterwards, Rangers’ inside-left missed another great chance. McClelland, Francis and Keen worked the ball down the right-wing, and City’s defence checked the move, but then a bad bounce and ricochet left Francis all on his own with the ball at his feet.

He swung it across-goal and Fisher palmed the ball on to the post. It went straight to Towers when it came out but, once more, the inside-left headed over the bar.

In the 70th minute, QPR equalised with a rather fortunate goal. Keen, Rangers’ right-half, setting himself for a power drive at goal, completely mis-kicked and the ball trickled to Bedford, who touched it on to Francis, who to me, looked offside, but the referee and linesman let the centre-forward’s goal stand.’

This result left the Tigers in eighth spot and the R’s in ninth position.

I must mention the reference to Ray Drinkwater in the Bush Telegraph section of the match programme:

‘One point of interest that may have escaped you. Quite a few of those 34 goals have originated from our own goalmouth through Ray Drinkwater throwing the ball to a colleague who has positioned himself well for such a clearance.

The days of the goalkeeper giving the ball the big boot upfield are over. Intelligent use of the ball is what counts. Drinkwater’s experience already this season proves that goalkeeper’s can make goals as well as save them.’

The following week the R’s travelled to Newport County and recorded a magnificent 4-2 victory.

(The newspaper report & match programme are from my collection)