Located at 395 King Street, Hammersmith, the Commodore opened its doors in September 1929.

The Cinema’s monthly publication announced that for June 1934, their ‘Big Picture Parade’ would commence on the fourth with the ‘Scotland Yard Mystery’. Starring Sir Gerald du Maurier (cert. “A”), it was to run for seven days

The film was described as: ‘Presenting an unceasing supply of tense, dramatic situations, it tells of a tremendous Life Insurance swindle unearthed by the Chief Inspector of Scotland Yard’ and went on to advise that it was ‘only for definitely unsqueamish patrons.’

Coupled with that was Jimmy Durante in ‘Meet the Baron’ (cert. “U”). ‘A hilarious mixture of comedy, lilting musical numbers and spectacular scenes….’ 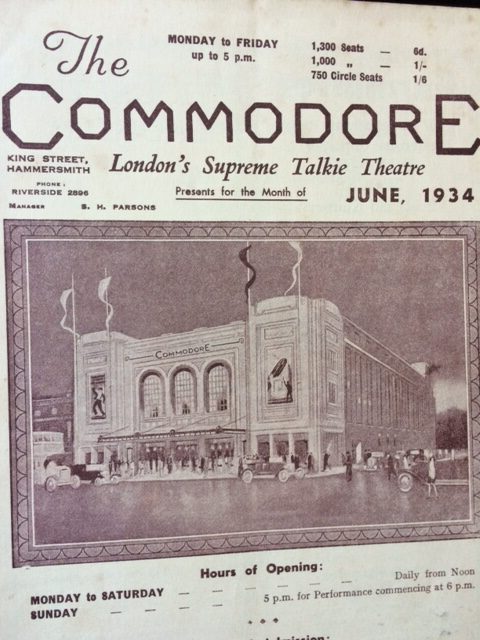 Headlining a week later was ‘The Lady Killer’, (cert. “A”). Described as a ‘film within a film’, Jimmy Cagney appeared as a motion picture star.

Also on the bill were, ‘Convention City’ (cert. “A”), starring Joan Blondell, plus a short animated Walt Disney film, ‘Giantland’, which was an adaptation of ‘Jack and the Beanstalk’ and featured Mickey Mouse in the title role.

Next up on 18th June for seven days, was a film written by Noel Coward. Titled ‘Design for Living’, (cert. “A”), it starred Fredric March, Gary Cooper and Miriam Hopkins.

The other film that week was, ‘Shadow of Sing-Sing’ (cert. “A”) and on stage for six of those days were the ‘Commodore Broadcast Orchestra.’ 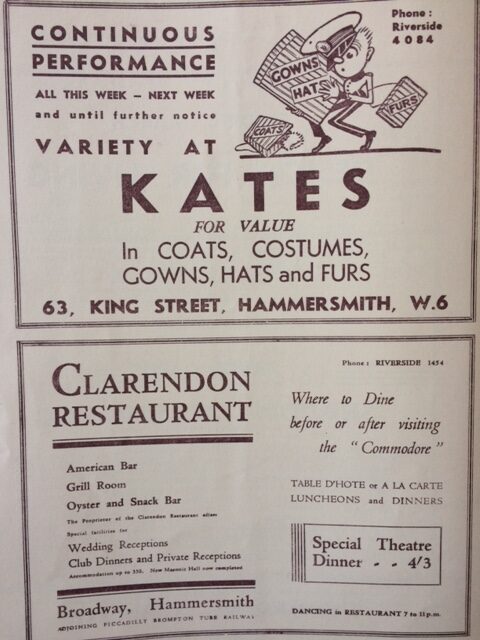 Completing the month was ‘Son of Kong’, (cert. “A”), which was the follow-up to the hugely successful ‘King Kong’. ‘Goodbye Love’ (cert. “A”), was also on the bill and it featured Charlie Ruggles, Verree Teasdale and Sidney Blackmer. It told the story of a butler posing as a wealthy English nobleman who ‘runs wild in Atlantic City.’

Performing daily were Harry Davidson (‘something new at the organ’) and Joseph Muscant & his ‘world famous Broadcast Orchestra.’

Admission prices from Monday to Friday, up to 5pm (holidays excepted), were 6d, 1/- and 1/6 up in the Circle, whereas on Saturday and Sunday they ranged from 9d to 3/6.

The cinema closed in 1963 and the building was demolished in January 1982.