Today marks the 75th anniversary of VJ Day in 1945. Emperor Hirohito had announced the surrender of Imperial Japan to the Allies and on the following Friday the West London Observer reported that:

Celebrations commenced before midnight on Tuesday as soon as the radio announced that Japan had accepted the United Nations peace terms.

All night long the principal streets of London were thronged with revellers and then in the early morning dense crowds made their way to vantage points to see the Royal Procession for the opening of Parliament.

Hours before the King and Queen were due to leave Buckingham Palace, the crowds had lined the royal route along the Mall, Whitehall and Parliament Square, and even when there was a downpour of rain not one spectator took cover. They couldn’t! It was barely possible to move.

All the way from the Palace to Parliament, the coach was met with waves and cheers. At the Peer’s entrance to the Houses of Parliament enthusiasm was at its greatest despite the rain. 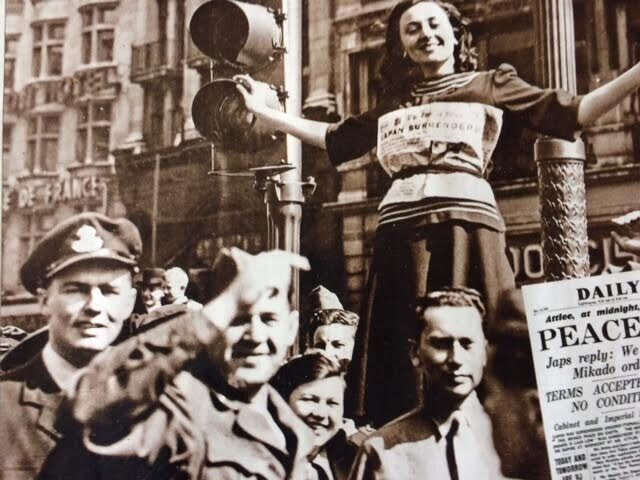 As the news was received, crowds danced and sang in the streets. In Westway, Shepherd’s Bush, pianos were dragged into the streets and people danced in the light of a huge bonfire.

Bonfires were lit in many streets of West London. At Hammersmith, there were scenes of great jubilation and thankfulness when the news was received that Peace had come at last by the Allies’ victory over Japan.

Quite early on Wednesday morning the streets of the borough were again liberally be-flagged as on VE Day and a programme of celebrations was quickly arranged.

In the evening the celebrations were in full swing and a large crowd assembled outside the Town Hall at 9pm to hear the broadcast of the King’s speech, which was also relayed to the Broadway.

After the broadcast the Mayor (Councillor F. Brader, J.P.) addressed the crowd. A large bonfire on the open space at the rear of the Town Hall was lit by the Mayor and later there was dancing in the open space, which was illuminated with chains of electric fairy lights, while the area was floodlit from the Town Hall building.

There was flood-lighting of parts of the Broadway, where a large crowd had assembled to celebrate and many business houses at Shepherd’s Bush Green were also floodlit.’

During Wednesday and Thursday, the Town Hall relayed light music throughout the day and dance music in the evening.

The Kensington Post reported that: ’There were tremendous queues for bread; bakers have never been so overwhelmed with the single exception of VE Day, as they were by housewives anxious to make sure of two-day’s bread, whatever else they and their families had to forego.

Butchers, grocers, greengrocers – all were besieged an hour and more before the usual opening time. Womenfolk with unhappy memories of the shopping rush that marked VE Day, had hoped that some more satisfactory arrangement would be made for food supplies on VJ Day.’

On 25th August, there was a Victory Garden Show at Lime Grove Baths, which was organised by the Hammersmith Borough Council Allotments Committee, in aid of the Red Cross Agricultural Fund.’

I would like to add these opening lines from T. Hamilton Steele’s dedication to the British Commonwealth of Nations:

‘From a world that’s deeply wounded through the awful years of war,

And from widespread devastation such as none have known before,

From the debris of the homesteads, once attended with such care,

And from the ruins of the cities with their streets now sadly bare,

From the spirits of the loved ones who have met the cost with life,

From the hearts of all the people who survived the pain and strife,

From the faith and hope of nations as their tribulations cease,

There arises, ever glorious, the light of Worldly Peace.’