Sad to hear the news that QPR full-back of the 1960’s, Pat Brady, has passed away.

Pat along with his brother, centre-half Ray Brady, signed for the R’s from Millwall in time for the 1963/64 season. They formed a defensive partnership during the 1963/64 and 1964/65 campaigns.

As I recollect Pat was a steady workman-like full-back who could play on either flank.

Pat departed from Loftus Road at the end of the 1964/65 season. Millwall and QPR were his only English League clubs. 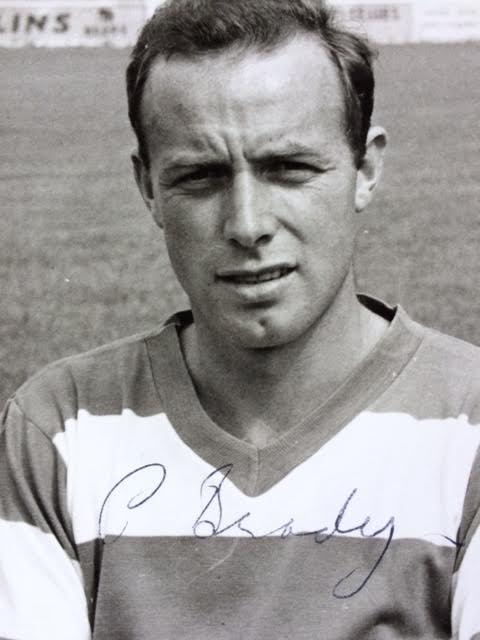 Pat arrived at Loftus Road from Millwall with his brother Ray, in July 1963. In September the Bristol Rovers programme featured Pat as No.5 in the ‘Meet the Newcomer’ series.

‘Nowadays it would seem that full-back Pat Brady is playing in the shadow of his younger brother Ray, who last week gained his first international cap. But not so many months ago the picture was entirely different. Then Pat was in the spotlight.

A former schoolboy international, he was spotted playing for Irish League side Home Farm by Jimmy Seed who was manager at Millwall.

Ray was Millwall’s regular left-back at the time, but Pat came over and pushed him out of the side. And he kept him out until Ray re-appeared in the first team at centre-half.

In all, 27-year-old Pat made over 150 first team appearances in the four and half seasons he was with Millwall.

During that time Pat has also been studying Economics at London University in the evenings and afternoons. He takes his final examination next May.

It was while studying that Pat met his 21-year-old German wife Edith who was at London University. They were married during the summer and live in Catford.’

The August 1964 Scunthorpe home programme reported in the ‘Quick Pars on Rangers’ section that:

‘Not many clubs are able to boast that THREE brothers played for them in the same week. That’s the boast of Queen’s Park Rangers. Today Ray and Pat are scheduled to turn out in the first team and tomorrow 16-year-old Frank is playing for our junior South East Counties team in a friendly match against Harrow St. Mary.

Frank is over in this country from Dublin for a holiday and is staying with Ray.’ It then went on to add that eight-year-old Liam was also over and staying with Pat.

Pat had made his first team debut on 4th September 1963 at Aldershot in a League Cup tie and went on to make 70 appearances for the R’s. He moved on to Gravesend & Northfleet during the summer of 1965.

After a long illness, news of his passing emerged earlier this month.

3 thoughts on “In Memory of Pat Brady”