Following a recommendation from QPR’s Scottish scout, Johnny Barr, the ‘Daily Mirror’ reported on 2nd February 1954: ‘Queen’s Park Rangers – no goals in seven of their last eight league games, bring down from Scotland a 13-stone, 6ft tall, twenty-one-year-old centre-forward, Willie Clark, in an effort to cure that goal shyness.

He is due in London on Thursday and will be in the Rangers’ team against Shrewsbury on Saturday. Rangers signed him from junior club Petershill in face of opposition from three other League clubs.’ The transfer fee was reported as £500.

Despite an impressive debut, that match, amazingly, ended goal-less! ‘How the crowd wanted a goal for this new chum! Even the Shrewsbury defenders patted him on the back for good tries in the closing minutes’, reported ‘The People’. Willie went on to score six league goals that season.

The local Gazette reported on 11th November that: ‘At their own request, Bobby Cameron and Willie Clark have been placed on the transfer list. Thus, the Rangers’ directors have upheld their principle of granting a place on the list to any players who make such an application.’ Two months later he asked to be taken off the transfer list.

The following season, Willie notched up 15 goals in his 39 league appearances. 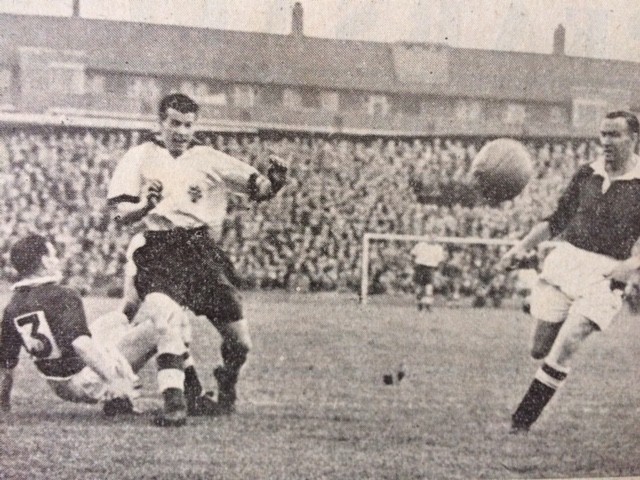 1955/56 was to be his last season for the R’s. In his final league appearance, Willie scored a dramatic winner against Northampton Town: ‘As the referee glanced at his watch before whistling the close of Saturday’s game, Bobby Cameron raced across to take a free kick…he crossed the ball low and centre-forward Willie Clark hurled himself forward and netted the ball with his head. It was the Rangers’ third and winning goal.’

Willie wanted to return north and in July, Berwick Rangers opened up negotiations for his signature.

He made a total of 97 league and cup appearances for the R’s and scored 32 goals.

After his transfer, ‘The People’ reported in August: ‘Warmest handshake ever given a manager by a player came from Willie Clark, Queen’s Park Rangers centre-forward – on the day he left them to join Berwick.

You see, Jack Taylor, the “Guvnor” with a heart of gold, had agreed to Willie’s release so that he could live nearer home and take over as head of the family from his badly injured miner father.’