This testimonial match on 14th March 1960 against Middlesex Wanderers, was organised by the Supporters’ Club in aid of the Players’ Benefit Fund.

The Middlesex Wanderers club was founded in 1905 by Bob and Horace Alaway. Membership was open to amateur players who had attained international or county representative honours.

Rangers had played them regularly at Loftus Road in the mid to late 50’s, but this match proved to be the final encounterbetween the two sides. The following match report later appeared in the Hammersmith & Shepherd’s Bush Gazette:

‘Queen’s Park Rangers management were disappointed that only 1,668 people were present for the entertaining friendly match against the famous amateur team Middlesex Wanderers, in aid of the Players’ Testimonial Fund on Monday evening (writes ‘TEMPO’).

Though entertaining the game provided few thrills to keep the crowd really happy. Rangers played casually throughout against the more eager amateurs, who displayed some attractive open football. 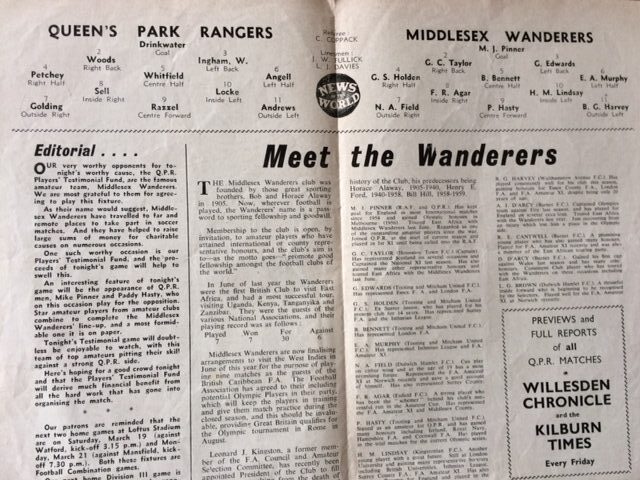 The Wanderers took the lead when goalkeeper Ray Drinkwater collided with Hasty and one of his own defenders, and inside-left Hugh Lindsay, a Kingstonian player, with the easiest of chances, scored in the 34th minute.

Early in the second-half, Norman Golding narrowly missed with a fine header and then a shot that beat Pinner but went inches wide. The young outside-right appears to have regained much of his early season confidence now.

Right-half George Petchey jigged his way through the opposing defence to score with a low shot, which Pinner got a hand to but failed to stop for the equaliser in the 56th minute.

Pinner brilliantly dived to keep out a hard ground shot from young centre-forward Derek Razzell, who was given few chances to shine. Inside-right Charlie Sells was the most promising of the amateurs in Rangers’ team and was just checked in time by right-back Taylor when though.

Hasty didn’t have a good game and wasted a good chance by shooting wide with only Drinkwater to beat.

The amateur team deservedly clinched the issue when Lindsay brilliantly flicked the ball past Drinkwater from an acute angle for the winning goal four minutes from the end.

In a late Rangers bid to save the game, Angell blasted a free kick inches wide and then Les Locke completely mis-kicked when well placed in front of goal.’