In January 1963 as a 14-year-old schoolboy, during our White City season, John Bloom the Rolls Razor and washing machine magnate, wanted to take control and become the R’s chairman.

I was all for it at the time…Rangers backed with wealth…new quality players…promotion out of the Division 3 mire… fame…what a prospect!

Obviously with hindsight this would have been a bad move because only a few years later his business empire collapsed.

Also, at this juncture the famous television satire show: ‘That Was The Week That Was’ with David Frost and Millicent Martin etc, did a sketch taking the “mickey” out of the John Bloom/QPR saga.

Several of those TW3 programmes have been repeated over the years, but not that particular showing. Colin Woodley will I’m sure be able to verify that his enlightened parents allowed him to stay up late and watch this type of TV!

During 63/64 John Bloom had a second bite of the cherry and there is evidence of this if you read the Club Notes by Ranger from the 30th November 1963 home match programme v Coventry City.

After this, John Bloom dropped off my radar and the last I heard he was running a chain of Diners in the USA. 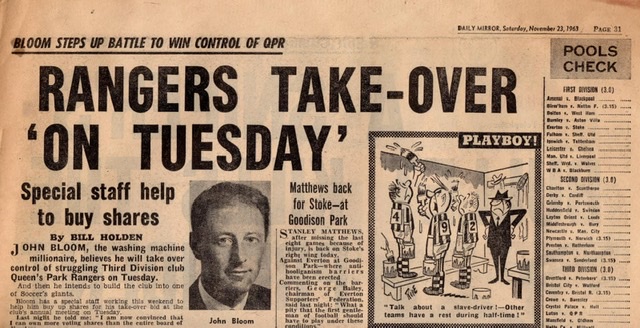 John Bloom was described by one journalist as: “The Cockney wonder-boy of the washing machine world”. He made his millions in double-quick time out of one simple idea that his competitors had missed.

He by-passed the shops to sell directly to housewives at prices which no household longing for labour-saving help with the weekly wash, could resist.’

In the early 60’s he had a flat in Park Lane, a Rolls-Royce, gold cuff-links shaped like washing-machines and a taste for crocodile skin shoes.

John Bloom is listed as a QPR director in the Hull City match programme dated, 22nd October 1962 and a month later the headline in the Daily Mirror reads: “Rangers Take-Over on Tuesday.”

A buoyant John Bloom told Bill Holden: “I am now convinced that I can own more voting shares than the entire board of directors.”

“I personally am prepared to give the Club £100,000 to BUY new players. I have two or three wealthy industrialists who are willing to join me in giving Rangers an extra £200,000 between them for new players.”

“In the end it may be the small shareholders who will decide. There are a lot of people who own just two or five votes. I hope they come to the meeting.”

However, the programme notes that Bernard refers to, reads as follows:

‘This has been quite a week one way and another. It started last Saturday with our tremendous fight-back at Luton to gain a valuable point, followed by the Annual General Meeting of the Club on Tuesday.

Then came the two-day wait for the result of the poll by shareholders – one of the most important in the history of the Club – and finally, today’s meeting with Third Division leaders Coventry City.

As no doubt most of you are aware, the name of the Club has appeared frequently in the National Press in recent weeks, coupled with the name of Mr John Bloom, shareholder and former director who has been reported as saying he would like to become chairman of Queen’s Park Rangers.

Last Tuesday at the A.G.M, a number of shareholders, on a show of hands, twice voted against motions put forward by the board of directors. The motions concerned the acceptance of retiring director Mr Bert Farmer.

After each show of hands, Mr George Wodehouse, the Club chairman, demanded a paper vote on each issue to give a true picture of the views held by shareholders.

Mr Wodehouse explained after the meeting: “Although several shareholders voted against us, it does not follow that they control enough votes on paper to form a majority opinion. The paper vote is the only true vote to ascertain whether the board has the confidence of most shareholders.

And this was exactly what happened when the count of the paper vote was finalised on Thursday evening after more than 14 hours of checking and cross checking by the club’s auditors and solicitor.

Two apparent defeats on a show of hands were turned into victory for the present board by the paper vote. The final figures of the paper vote were as follows:-

Commented Mr Wodehouse: “We were confident all the way through that the majority of the shareholders would sensibly throw their support behind us, but we are still elated by the size of the majority. This is a victory for football.”

The meeting was held in the Ellerslie Road Stand under floodlights and was described as chaotic at times with arguments breaking out amongst the shareholders.

After the A.G.M. the Liverpool Echo reported that: ‘L. M. Doffman & Co., solicitors for Mr John Bloom said today that Mr Bloom had issued a writ against Mr George F. Wodehouse, chairman of Queen’s Park Rangers Football Club, in respect of damages for alleged slander and an injunction to restrain the further publication of the alleged slander.’

In 1969 it was reported that Bloom, the former managing director of Rolls Razor Ltd, had been fined £30,000 (equivalent to nearly half a million pounds now), with two year’s imprisonment if he failed to pay.

The first charge to which he had pleaded guilty to was that on May 14th 1964, being a director of Rolls Razor Ltd, with intent to deceive shareholders of the company. He also pleaded guilty to the second charge.

In 1971 he had a book published titled, ‘It’s No Sin to Make a Profit’. This had been his motto since the judge had sided with him and stated the above after being taken to Court.

The chain of Diners that Bernard refers to, began in London in 1972 as a medieval themed restaurant called ‘1520 AD’, which later expanded to the USA.

Bloom was well known for his social connections with celebrities and politicians. Apparently, David Bowie credited him for being instrumental in getting his first record deal after he had performed at a party at Bloom’s flat in Park Lane.

(Thanks to Bernard, Colin Woodley and Peter Trott for their assistance)