The following image and caption appeared in the Illustrated War News on 16th December 1914:

‘The Exhibition grounds at the White City at Shepherd’s Bush are no longer a haunt of light-hearted Londoners in search of amusement but are devoted to the sterner tasks of military training.

Some of the large show-cases have been fitted up as sleeping-places for the men, who may be seen every day hard at work drilling amid the incongruous surroundings of the great pleasure-ground, where the ornamental switchback railways and other side-sows still remain as reminders of the far-off days of peace.

The gigantic grotesque head that formed the entrance to “The Devil’s Cave” makes a striking background to a drill and suggests the fact that these men have before them a task more formidable than ever confronted Jack the Giant-Killer.’ 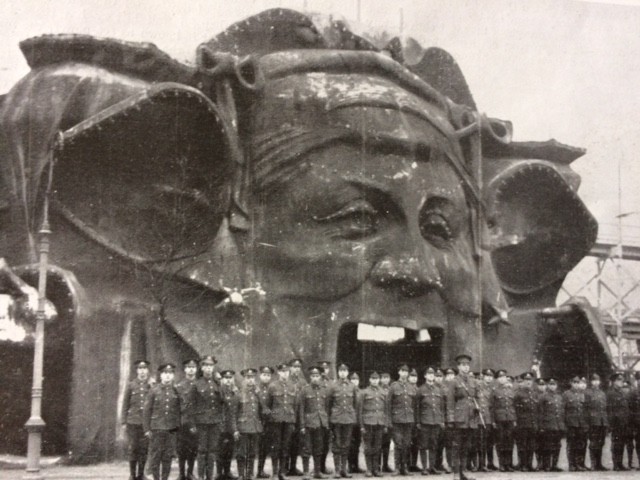 The 17th (Service) Battalion, Middlesex Regiment, was formed that month at Fulham Town Hall. Many in the battalion were footballers and it became known as the Footballers’ Battalion. The Birmingham Daily Mail reported the following month that:

The men, under Colonel Grantham, mustered about 250 strong and after receiving their pay to date, marched to their temporary quarters at White City.

Amongst the recruits, were representatives of most of the notable teams south of the Trent. They received a cheer from spectators as they left.’