QPR’s first trip to Drogheda was in 1979, which was then followed by another visit there three years later.

Rangers’ third visit to United Park was on Sunday, 29th July 1984. A match report appeared in the Drogheda Independent a few days later.

‘Queen’s Park Rangers, on their third visit to United Park in five years, completed their hat-trick of victories over Drogheda United on Sunday, winning 3-0.

The English First Division club, however, were somewhat flattered by the winning margin as two of their goals came in the concluding six minutes when the tiring home team gave way to the fitter and stronger finishing visitors.

The United manager, Tony Macken, need not be too despondent at the final score-line as for upwards of an hour the homesters, with five newcomers on view, more than held their own against Rangers who finished fifth in the first division last season.

Much interest was focussed on the performances of United’s newcomers, the veteran Peter Thomas in goal, Joey Salmon, ex-St. Patrick’s Athletic and Athlone Town, and Ritchie Williams, the former Home Farm and Bohemians player.

All had their moments during the 90 minutes, which would indicate that they will be of benefit to the club when the more crucial league championship games get under way in September.

Special interest was also focussed on Mick Fairclough, making a return to Drogheda after 13 years during which he rendered excellent service to Huddersfield Town and for the past five seasons with Dundalk despite a nagging knee injury. He too displayed some nice touches and won a number of heading duels against the towering Rangers defenders.

A disappointing aspect was the absence of new signing Roddy Collins, who was away in the Isle of Man assisting his former club Athlone Town in a special international there, arranged before he had signed for United.

Another absentee was Gerry Martin, who was on holiday, and the inclusion of this pair for the matches ahead should undoubtedly strengthen the panel considerably to that which did duty on Sunday.

Taking into account also that Frank Flanagan did not line out for the second-half, having just returned from holiday the evening before, and that Matt Bradley was forced to retire in the 61st minute with a pulled muscle, the all-round performance of the United team was not as bad as a 3-0 defeat would indicate. 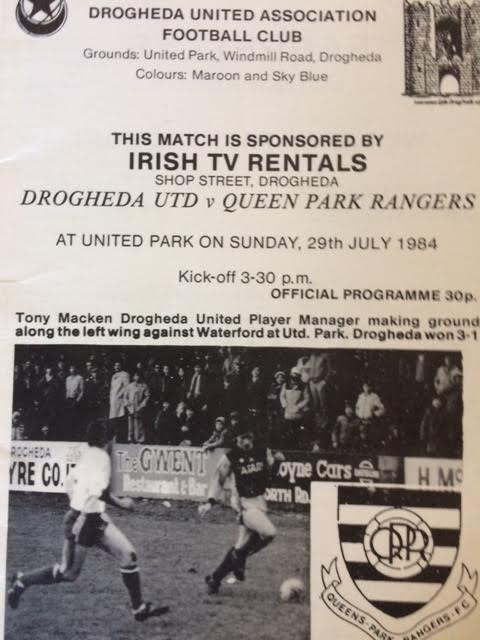 The scores were level at half-time and great credit for this must go to Thomas, who marshalled the defence in front of him very effectively.

The London club finally took the lead in the 56th minute. New signing Gary Bannister from Sheffield Wednesday sent over a perfect cross to the unmarked John Gregory who headed past Thomas.

Clive Allen was replaced by Wayne Fereday, who scored twice in the Londoners 3-1 win over Waterford at KilcohanPark on Friday evening.

With six minutes to go, Bannister’s corner was headed in off the upright by Micklewhite to make it 2-0 and with two minutes remaining right-back Gary Chivers availed of a Dillon miskick in midfield to gain possession and run on to slip the ball past Thomas for the final goal.’

It was noted in the programme that the you could meet the players after at the Rossnaree Hotel and dance to the music of Unison. Tickets were £2 and available on the door.

The R’s had begun their Irish tour two days earlier with a 3-1 win in Waterford and then completed it on the 30th July with a 3-0 victory against Longford Town.