‘When Arsenal play Queen’s Park Rangers at Highbury on Saturday, Malcolm McDonald and Stan Bowles will come face to face for the first time since Supermac was signed from Newcastle for £333,000.

Here, Bowles and McDonald – discuss their hopes for the season, their ambitions on the international scene and their very different styles of play.

Bowles explains why he believes Arsenal need to strengthen their squad and McDonald takes an equally critical look at the Rangers set-up.

MM: There’s been a lot of talk about our personal rivalry, but I think too much emphasis has been put on it.

SB: I agree, Malcolm. We both want to be top scorer in London at the end of the season. But that’s a healthy challenge rather than a personal feud.

MM: Frankly, in the skill stakes, I believe you are one of the most talented footballers in the game. But I question your consistency.

SB: By the same token, I’ve never denied you are a first rate goalscorer. Your record speaks for itself. But I question your level of ball skills.

MM: What it comes down to Stan is two completely different styles. I live to score goals. That’s achieved by taking the shortest possible route to goal – often a straight line!

SB: There’s more to it than different styles. We are totally different builds as well. Battering-ram tactics would get me nowhere. I admire the exciting way you attack defences. But picture me running head-first into a couple of beefy defenders!

MM: Let’s just agree to differ, Stan. We are both good at what we do and there’s little sense in analysing our individual styles in a critical way. I could never play the game your way either. Yet we both have the same end in sight…scoring goals.

SB: There we agree all the way, Malcolm. There are no bad goals.

MM: Our personal battle for top spot is only a chip off the real target, Stan. I want Arsenal to be among the honours this season. And I’m convinced we’ll pip Rangers.

SB: Never in a million years. I agree our games with Arsenal are always close and they are a difficult side to beat, but honours this season? Sorry Malcolm, you are short of top-class players.

MM: But you can’t assume Rangers will march away with a trophy simply because they did well last season. Football doesn’t work like that.

SB: We have more to back our claims than that. We have the players at Rangers to win a major honour this season. The Arsenal squad are inexperienced.

MM: We do have a lot of young players coming up through the ranks. But they are maturing very quickly. Do not make the mistake of thinking we have another year to wait.

SB: That’s exactly what I do think, Malcolm. You, Alan Ball, Jimmy Rimmer and Liam Brady fit the bill. But the young players are still learning their trade.

MM: For that matter Stan, some of Rangers’ players have learnt their trade well…Frank McLintock and Dave Webb are, if anything, too experienced. Beware of the myth that experience beats all. It looks pale against young blood, pace and power.

SB: Don’t forget skill. We’re not short of that, you know. I agree a mixture of youth and experience is a good thing providing it’s properly balanced. And we have a brilliant balance at Rangers. Just watch us climb the table.

MM: Fair comment Stan. I back Arsenal to be up there with you. You won’t have London all to yourselves this season.

SB: You have an annoying knack of scoring against Rangers, Malcolm. I lost count of the cup-ties we’ve had with Newcastle in the past two seasons. You made most of them unhappy nights for us. So that’s one I owe you. 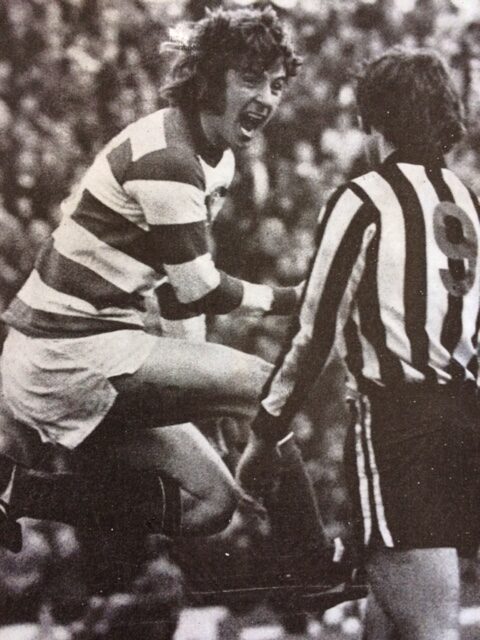 MM: You’re not so blunt yourself when it comes to scoring against Arsenal. You scored twice against the Gunners in 1973-74 and repeated the dose in 1974-75.

SB: I suppose with the World Cup games under way, we are rivals for a place in the England team.

MM: Sorry Stan, I disagree again. This time I believe there’s room for both of us. Imagine that for a night of colour. Our vastly different styles don’t clash in any way. For that reason, I’d like to be in the same England side as you.

SB: I’d like to be back in the England squad. It’s a natural feeling. You must feel the same way. I’m convinced we’d both silence a few critics with a goal or two apiece.

MM: Tell you what – if you score at Highbury I’ll buy you a drink afterwards. If I score, it’s your round.

SB: If we both score?

MM: What about a good old handshake!’

This took me back to the match at St. James’ Park near the end of the previous season when Stan scored a dramatic winner in the 89th minute.

John Brough’s classic photo captured the moment Stan celebrated in front of Malcolm McDonald, apparently shouting: “What do you think of that?”