The following article was written by Eric Nicholls and appeared in ‘Goal’ magazine on 4th August 1973:

‘When your brother is a well-known footballer, it’s difficult not to attract attention when you go out to show off your own Soccer skills.

That’s the problem Susan Francis faces every time she pulls on the No.3 jersey for Queen’s Park Rangers Ladies.

Brother Gerry is the QPR midfield ace currently being freely tipped for a place in the England Under-23 team.

Now Susan would like to find her own identity on the football field. As she says: “It’s a bit awkward being Gerry’s sister. Sometimes I wonder if I am Gerry Francis’s sister or Susan Francis. I’d much rather be Susan Francis.”

Susan has been a regular in the QPR Ladies team for about a year and she has no doubts about the Soccer skills in her side. She says: “We’re just as good as the blokes. I’m not talking about the QPR team, of course. We aren’t that daft, but girls can play football. And we’ve proved it.” 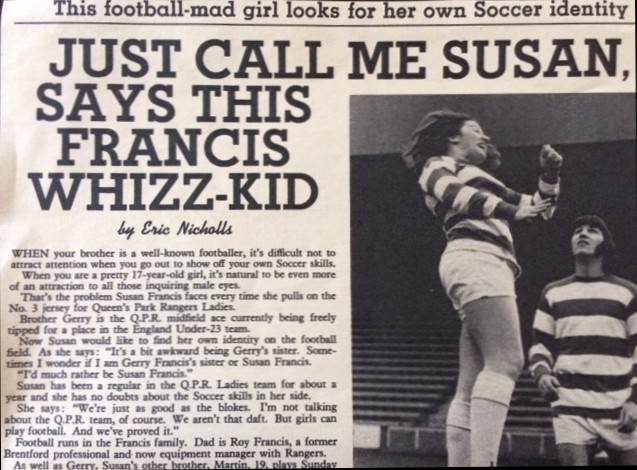 It was natural that Susan should think more about football as she grew up. “What can you expect,” she says. “With two Soccer-mad brothers and an ex-professional as a father, it had to be football. From the age of eight, I was out in the park with my brothers kicking a ball about.”

Susan started playing as a winger, but has since moved to left-back and says with the voice of someone who knows her Soccer: “I’m enjoying the game even more now. I definitely prefer full-back. You see what’s going on far better.”

For Susan, Soccer takes up most of her time when she isn’t working for the British Egg Information Service.

Susan spends two nights a-week training with QPR Ladies and on Saturday’s it’s off with her friend Jackie to the QPR training ground to watch the youth team when they are at home in the morning and then on to Shepherd’s Bush for the first-team game in the afternoon.

But brother Gerry takes a back seat when it comes to idols. Sorry Gerry, but John Delve, the 19-year-old who shot to stardom last season, when Rangers were hit by injuries, is Susan’s favourite.

Susan’s boyfriend, 17-year-old Steve Williams, doesn’t mind about her hero worship of the stars. He’s a football fan himself and often spends his evenings out with Susan – yes, you’ve guessed it – playing football!’