The QPR board of directors decided in 1931 to move the Club a stone’s throw away to the White City Stadium.

The R’s opening league game on 5th September against Bournemouth in front of nearly 19,000 resulted in a 0-3 defeat.

Reginald Bacchus of 59, Hammersmith Bridge Road wrote to the West London Observer suggesting that a change of name would be in order:

‘Sir, Now that the “Queen’s Park Rangers” have settled down in their splendid new playing arena at the White City, might one hope that their days of wandering are over, and that the club might be known henceforward as “The Hammersmith Club,” or, to preserve the popular half of the old name, “The Hammersmith Rangers.”

Their neighbours and rivals at Fulham and Brentford are named territorially, and why should so large a borough as Hammersmith not give its name to the popular club, which plays in its very centre.

Before they came to Loftus Road, “The Rangers” had ranged over grounds at Latimer Road, two separate grounds at Park Royal, and a ground at Kensal Rise, which they forsook for a period and returned to, so that the name, “Queen’s Park” cannot be said to have any definite association with them, other than sentimentally.

Old supporters would continue to call them, “The Rangers”, but the name “Hammersmith” would tell the outside world where the club was and would, I venture to suggest, bring most to the turnstiles’ – Yours, etc – Reginald Bacchus. 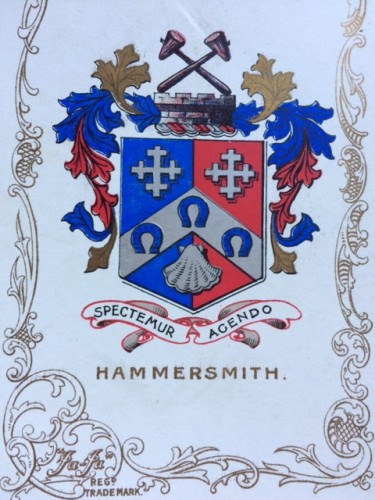 ‘Sir, I disagree with Mr R. Bacchus that Queen’s Park Rangers’ name hasn’t any definite association with them.

He concludes his letter by stating: ‘……and now, having given you the association of Queen’s Park, please let the sentimentality remain, even if we have moved to White City’ – C. Harris.

This reminded me of a letter that appeared in a 1953 match programme when the Club announced that it was introducing the Hammersmith Borough coat-of-arms:

‘Dear Sir, A report appears in the current issue of the ‘Kilburn Times’ that a future feature of the Queen’s Park Rangers kit will be the Hammersmith Borough coat-of-arms emblazoned on the players’ shirts and blazers.

It would be as well to call you notice before this step is finally taken that QPR was originated and nurtured at Queen’s Park and is therefore an essentially Paddington team where, I may add, the bulk of the Rangers’ supporters come from.

As a Paddington man and a supporter for over 30 years, I in common with others, feel that this is a retrograde step and will alienate a number of the old supporters who, though the quality of the football has deteriorated, still support what to them is their local Queen’s Park and not Hammersmith Club.’ – Yours truly – F. Edgeworth