The march of time has left me with the sobering thought that I am one of the few spectators out of a meagre crowd of 4,805 still alive and able to recall a personal account of this historic encounter on 3rd December 1960.

Reports of this fixture have already been widely documented in various QPR FC books and publications. Basically Rangers ran riot throughout and the goals were spread quite evenly amongst the R’s forward line; Bedford 2, Clark 2, Evans 2, Lazarus 2, Andrews 1.

The standout moment of the match was the brilliant solo Clive Clark goal for Rangers’ third after 37 minutes. I have to say that descriptions of this wonder goal in subsequent press reports and QPR FC record books do not do it justice and to this day it still leaves me quite underwhelmed and puzzled by the below par praise.

Okay I admit that I was a starry eyed 12-year-old witnessing events from the boys pen that damp December afternoon, but I kid you not…this was the greatest goal by a Rangers player at Loftus Road that I have ever seen. Yes, it was better than anything that Rodney Marsh or Stan Bowles ever did.

Clive Clark got the ball just inside his own half on the left-wing touchline. He then proceeded on an electric mazy run past five hapless defenders before cutting in and driving a powerful shot wide of the Tranmere keeper into the bottom corner of the net at the School End. Follow that George Best if you can!

The supporters in the old wooden Ellerslie Road Stand were still on their feet applauding after the kick-off resumed. Sensational! Nobody had ever seen anything like that before!

Now for the bad news. We sold Clive Clark to West Brom in January 1961 and with it our promotion prospects. Rangers finished the season third, two points behind runners-up Walsall and eight behind champions Bury. 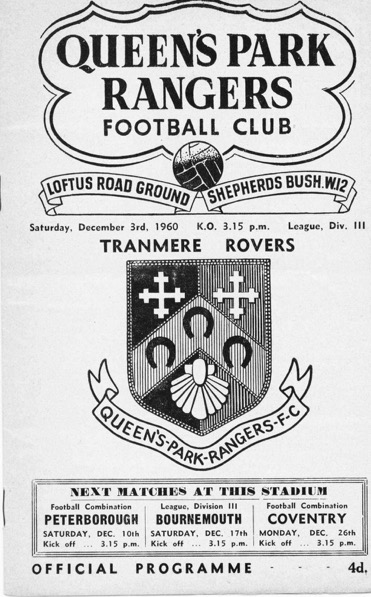 ‘Queen’s Park Rangers went one over the eight in what must have been their most sparking display for years. True, Tranmere are riddled with weaknesses, but the enthusiasm and skill of the Londoners must have aroused hopes of promotion among their fans.

With pocket-sized Jimmy Andrews back in the attack after a lengthy absence, almost every move Rangers attempted ended with a goal or a near miss. But once again it was teenage winger Clive Clark who stole the thunder.

I do not suppose I shall ever see a more glorious goal than Clark’s first, which put Rangers three up after 37 minutes. He collected the ball well inside his own half, left a trail of opponents panting at his heels as he cork-screwed his way into the middle, and let fly with a ten-yard drive which flashed past keeper George Payne like a rocket.

That goal made even those in the director’s box stand up and join in the thunderous ovation for this clever youngster, who has all the promise of being an England star one day.

But for the courage of Tranmere’s goalkeeper, George Payne, and the unruffled non-stop foraging of wing-half Bob Harrop, Rangers would have ended up with double figures.

With their recent new capture from Wrexham, Bernard Evans, leading the attack with punch and intelligence, and Mark Lazarus trying to prove that he is as good a winger as young Clark, the Londoners kept up the pressure as if they were a couple of goals in arrears.

Lazarus jinked his way through a number of desperate tackles and stormed into the middle to crash home number four.

Within 20 minutes of the re-start, Rangers were seven up – but tired, gallant Tranmere still attempted to play football. They got some slight reward when inside-right Ken Williams cleverly beat two men before flashing in a drive from just outside the box.’

The Rangers vice-chairman, G. F. Wodehouse, later reckoned that Clive’s first goal was: “the best I have ever seen.”

Rovers appreciated the ovation they received for being such sporting losers and their manager, Peter Farrell, said: “The crowd at Loftus Road always treat us well.”

In the ‘Bush Telegraph’ section of the programme the editor wrote: ‘I must congratulate Clark on his sportsmanship this season. I have rarely seen a player get such regular buffetings and I have seen him in the dressing room after games, black and blue with bruises. Bruised – but unbowed.’

West Brom signed him the following month for a fee of around £17,000.