Situated just a short bus ride from Wood Green Underground Station, this was my first visit to Coles Park. Originally it had been the home of Wood Green Town.

The pitch was converted to an artificial 3G surface in the summer of 2016.

Rangers enjoyed a lot of possession in the early stages, but it was the home side that began to look dangerous and I have to say that the Borough midfield certainly tested some of the young R’s players with their physical prowess.

Steve Bacon arrived, telling us that Wood Green Station was closed because of escalator problems and he was forced into making a time-consuming detour! 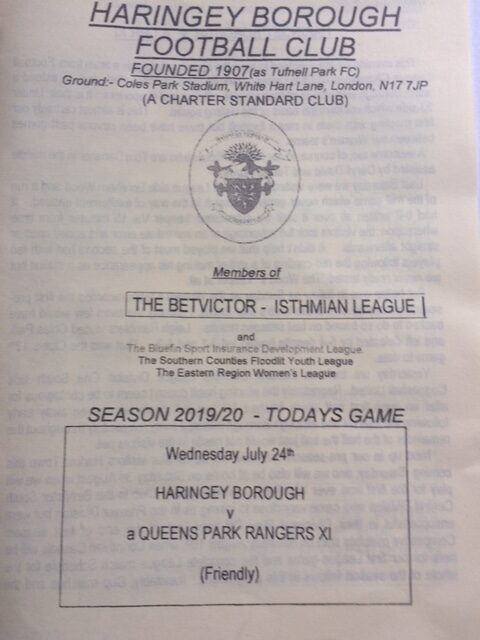 Haringey took the lead following a cross from the left. Dimitrios Froxylias in an unmarked position drilled the ball into the back of the net.

A low shot from within the box forced Tyla Dickinson down to smother the ball.

But Froxylias soon doubled their lead with a free kick that he curled into the top corner from 25 yards.

Whilst at the other end, Ody Alfa struck the ball powerfully, but straight into the keeper’s gloves. Half-time: 0-2.

Rangers made wholesale changes after the interval, whilst Haringey made eight substitutions during the second-half.

The R’s were certainly looking much better and after some good work by Alfa, the resulting free kick was well saved by the Borough keeper.

After a good run down the left, Deshane Dalling belted the ball low, across the six-yard box, but the Haringey custodian managed to get a touch to help it on its way.

After taking a long ball superbly on his chest, Dylan Duncan chipped it just wide of the far post.

Following a header from a Haringey corner, Tyla Dickinson did well to knock a dangerous bouncing ball behind.

On 79 minutes, Aresti’s free kick found an unmarked Scott Mitchell who headed the ball into the back of the net to seal the game.

Plans were being considered for the journey home, but as we approached the final whistle, word filtered through that the Station had just re-opened.