Marc Bircham put together a QPR Legends squad to take on a similar Wealdstone side in celebration of Gordon Bartlett and Leo Morris.

The R’s took the lead after just 3 minutes following a typical run from Gareth Ainsworth down the right-flank which resulted in a corner. The ball was swung over and, from a knock down at the back post Tommy Smith thumped it into the back of the net.

Danny Shittu could be heard from the bench shouting: “Come On QPR”.

Gareth Ainsworth was clearly fouled, but Mr Heavey wasn’t interested. As play continued, he did award a free kick to the home side in a good central position. Lee Chappell struck the ball well, but directly into Nick Culkin’s gloves.

At the other end, Martin Rowlands, after some neat footwork had set him up in the box, blazed the ball well over the crossbar.

A free header from a Stones player was stopped and cleared off the goal-line.

Later a dangerous through ball released a Stones player, but Marc Bircham had him in his sights. Even though at best 40/60 and with R’s fans around me shouting out: “Come On Birch”, to our delight, he made a superb challenge.

The tempo of the game was good and chances continued to be created at both ends.

Dennis Oli had an effort deflected behind for a corner and a word for Steve Gallen on his wonderful 40-yard pass placed precisely over to Marcus Bean on the left-wing (which he later repeated from a similar distance).

Terrell Forbes made a superb flying block in the box to deny the home side.

On 40 minutes Mr Heavey blew his whistle for half-time. 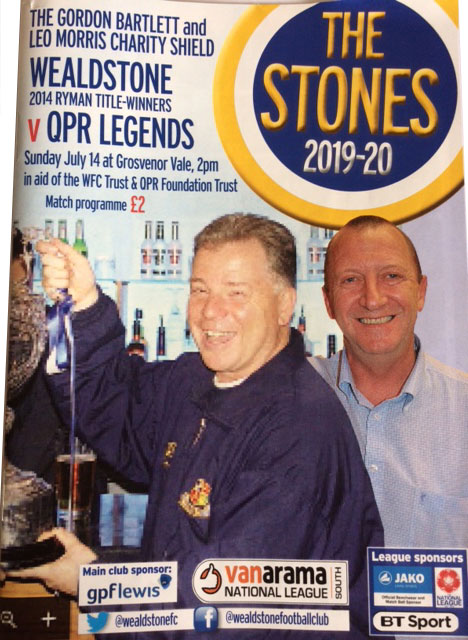 Into the second-half and a great ball from the right was dummied and found Tommy Smith. His shot forced the Stones keeper into making a diving save.

After 10 minutes, Scott McCubbin put a dangerous ball across the box to an unmarked Jey Siva. Nick Culkin had to be at full-stretch to make an excellent save.

At this stage Wealdstone were having the best of it and a ball knocked in from the left came off the top of the head of a Stones player and then behind for a goal-kick.

One of the biggest cheers of the afternoon came when Mr Heavey fell over in the centre-circle area!

Chris Moore could well of equalised on 57 minutes, but he didn’t get enough on the ball and his effort was deflected just wide of the post.

A deserved Stones equaliser came on 67 minutes. Jey Siva set up Scott McGubbin on the edge of the box who sweetly struck the ball low into the far corner.

However, with the aid of some fresh legs, the R’s upped their game and took the lead after Dennis Oli had finished well. Danny Shittu finally got on after waiting patiently for some time.

Scott McGleish had also been introduced for the R’s in the second-half after playing the first 40 minutes for the home side. He played a one-two with Dennis Oli whose first-time lob ended up just wide.

Rangers went further ahead after 76 minutes when Shittu headed the ball on to McGleish who made no mistake.

A good crowd witnessed a very enjoyable afternoon at Grosvenor Vale, which would have been swelled even more but for the World Cup Cricket final at Lords.

All the money raised will be shared between the Wealdstone FC Foundation Trust and the QPR in the Community Trust.