I met up firstly with Swedish R, Simon Staal at Northolt Station, and we moved on to rendezvous with Michael, Zack & George Gristwood at the Target. We made the Kassam Stadium in very good time.

The first opportunity fell to the home side when Rob Dickie headed over the crossbar from a corner.

Then on 17 minutes, Josh Scowen crossed into the box and Osayi-Samuel headed the ball just past the post.

Rangers took the lead on 31 minutes when Eze floated the ball across from a corner to the far post, which found Luke Amos lurking in space and he made no mistake heading home.

Two minutes later, the R’s fans were on their feet once again when Ryan Manning’s superb left-wing cross was headed into the back of the net by Amos from six yards.

On 39 minutes, Tariqe Fosu set-up Alex Gorrin who lofted the ball over a stranded Joe Lumley from just outside the box to half the deficit.

The R’s went close to a third just before the break when Josh Scowen’s effort bounced off the post. Half-time: 2-1. 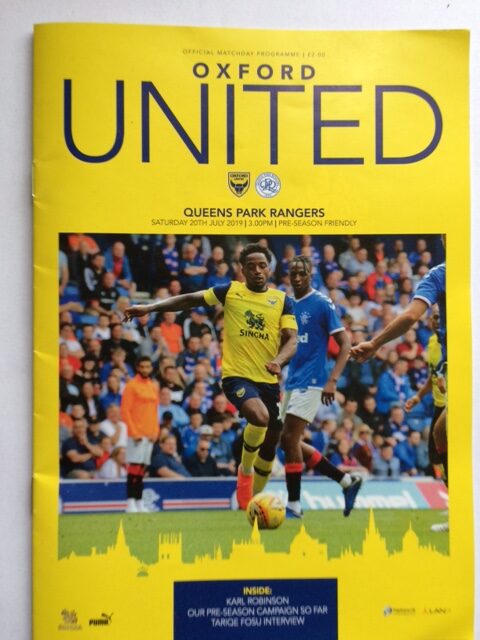 On 50 minutes, Ebere Eze drilled just wide after a low ball into the box had picked him out.

Joe Lumley instigated a quick attack with Olamide Shodipo, who then headed upfield, and put Bright Osayi-Samuel through on goal. Taking aim, he pulled the trigger, but the ball crashed off the crossbar.

With around five minutes remaining, substitute Tony McMahon hit the crossbar from a free kick.

With no recognised striker on the pitch, I have to say I was a bit surprised that Aramide Oteh sat it out on the bench?

A very welcome first pre-season win for the R’s, but a bit surprised that the Oxford website got a bit carried away about 1986 after a friendly match?

Thanks to Michael for the lift.