Back in the early 60’s a visit Colchester United’s old ground in Layer Road was a regular feature of our season.

As usual we would go by train and then walk to the ground, which was situated in South Colchester. This was no joy because after you leave Colchester Station you are faced with the ‘Mother of all Hills’ to negotiate to reach the town centre, and you were still faced with a long walk to the ground after that!

Even in those days the ground was dilapidated to say the least and one of the smallest we visited in our division. One end of the ground had a section taken out of the terracing to accommodate the back of the goal and net.

Just over two years ago we moved to Colchester and for some reason I had failed to connect the fact that the old Layer Road ground was very close to our house. I recently decided to investigate if anything remained of the old ground.

What I found should be shown to our Directors as a fine example of remembering your heritage.

Opened in 1907, Layer Road was a relatively small stadium, having a capacity of 6,320 at the time of its closure. This was for a time reduced to 4,900 for safety reasons, following closure of parts of the ground.

They did manage to achieve a club record of 19,072 in 1948 for an FA Cup tie, which must have been cramped to say the least!

It was first used by the Army and Colchester Town, an amateur side until 1937, and following much discussion about turning professional, a new professional club, Colchester United joined them.

Colchester Town subsequently folded due to mounting debts in 1937, leaving Colchester United as the only tenants.

Apart from having a rich history, Colchester has been the home of the Army since Roman times and our house is built on ex-military land. We are situated near the HQ for two brigades of the Parachute Regiment.

There has been much undertaken to commemorate the links to the Romans and the Army, with areas and street names named after key figures in the Army and various campaigns.

After studying maps of the area I decided to investigate if this also extended to other aspects of Colchester life. I was not to be disappointed.

I eventually located the old Layer Road site, which had been developed for housing and a deal was signed to build flats and houses with a requirement for a central open grassed space to reflect its history as a football ground. This grassed area was on the same site as the pitch.

In 2015 a bronze statue of Colchester United’s ‘Player of the Century’, Peter Wright was unveiled. This also commemorated it as being the home of the U’s for 70 years and out of respect for the supporters’ ashes that had been scattered on the pitch as an expression of their love for the club. 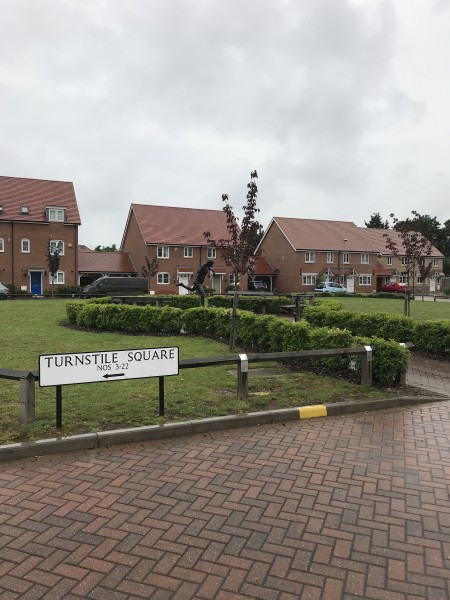 The square and approach road from Layer Road is known as Turnstile Square and it is a fitting tribute and superb example as to how to commemorate the past and one we should take note of if we move from Loftus Road.

Opened in August 2008, the Colchester Community Stadium, known for sponsorship purposes as the JobServe Community Stadium, has a capacity of 10,105 and is a good example of how to build a modern stadium. With excellent facilities, parking and superb access as it adjoins the A12.

Colin Woodley aka ESSEXURs, (with thanks to Kerrins for the programme cover shown below) 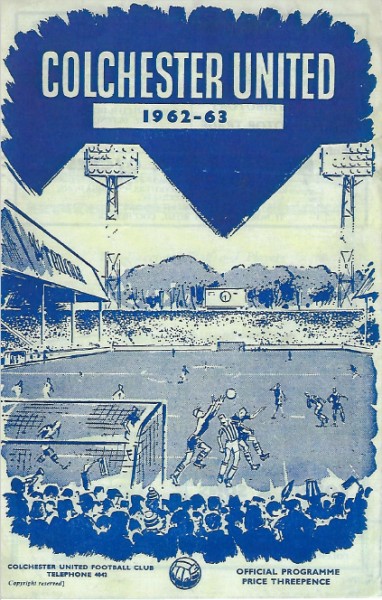 The R’s lost that match 1-2 in 1963 and in their previous nine post-war league visits to Layer Road, they won just one, drew 2 and lost six.

One of those draws was on 1st September 1956 and QPR lined up as follows:

The attendance was 8,179 and a brief match report later appeared in a local newspaper:

‘Don Quigley was given very little opportunity to elude the Colchester defence during the first-half of this game, which accounts for the sharing of the points.

Colchester were without their regular centre-forward, Kevin McCurley, who was injured, but despite this weakness they began by doing most of the attacking.

It was quite within the run of play that Colchester scored the first in the 37th minute. Plant put the finishing touches to a corner after a scramble in front of Rangers’ goalmouth.

Rangers’ goal came under constant pressure until half-time. Again and again it looked as if Colchester would increase their lead, but Rangers’ defence, efficient and solid, stood firm.

In the second-half Rangers’ forwards came more into the game, but Quigley was still bottled up by Milligan and the inexperience of right-winger Hellawell did not help matters.

Rangers’ equaliser, although unexpected, was thoroughly deserved. Quigley managed to escape the attention of Milligan for a few seconds, just long enough to deflect a centre from Petchey into the net.’

I met up with Colin in January for Rangers’ first appearance at the JobServe Community Stadium, when the U23’s were defeated 1-2.