Brentham FC were founded in 1919 by three young soldiers returning from the War. The Club marked their Anniversary last week with a fixture against a QPR side made-up of players aged; 17, 18 and 19 respectively.

The football club is part of a sports complex, which includes cricket, tennis and bowls, all set in 12 acres of conservation land.

I set off for Ealing in good time for the 6.45pm kick-off. With no floodlights, the ground is tree-lined on three sides, situated beside the River Brent and has a changing room behind one of the goals. 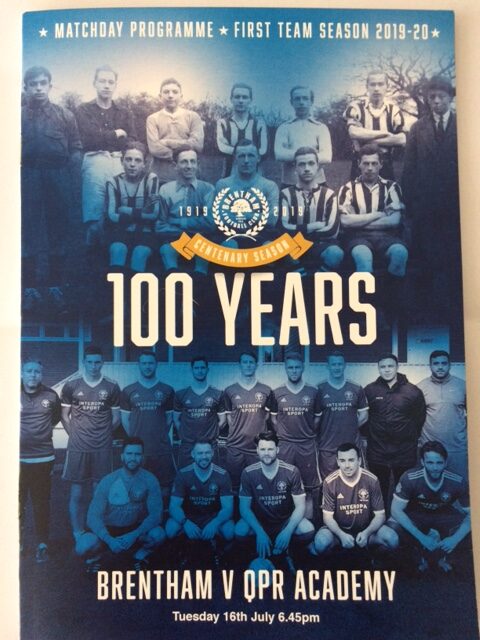 Amrit Bansal-McNulty went close to opening the scoring after chipping the ball just wide of the far post. It wasn’t long until Charley Kendall put the R’s ahead with a thumping header.

A good passing move saw Bansal-McNulty set up Faysal Bettache, but his shot was blocked and the ball was cleared.

Further chances for the R’s followed; Bettache’s cross found Dylan Duncan in the box and his header was knocked onto the post. Amrit Bansal-McNulty was through on goal, but he screwed his effort off-target.

At the other end, the home side went close to an equaliser after a chipped ball forced Tyla Dickinson to dive backwards and knock it behind for a corner.

Bansal-McNulty doubled the R’s lead with a well-placed shot in the corner.

Two soon became three when Dylan Duncan, in space, curled the ball into the back of the net.

Jake Frailing came on for Amrit Bansal-McNulty (who was to be re-introduced after the interval). Half-time: 2-0.

As QPR went in search of a third goal, Faysal Bettache his the upright. Then the Brentham keeper made an outstanding fingertip save from the R’s trialist wearing the No.7 shirt. His fierce shot had been heading for the top corner.

That trialist then saw a powerful cross/shot cleared. The next goalscoring opportunity came from Charley Kendall, but he blasted the ball just wide.

The Rangers’ No.9 went even closer when, situated just outside the box, he looked up and pulled the trigger and the ball bounced off of the crossbar.

Then a low cross from the left-wing forced Charley Kendall to stretch in an attempt to control the ball and shoot, but he just couldn’t manage both.

Ben Wells went off and Dylan Duncan came back on again. Duncan soon tried his luck from outside the box as he chipped the ball just over the crossbar.

Amrit Bansal-McNulty made his return at the expense of Charley Kendall and it wasn’t long before he scored his second and the R’s fourth goal, with a sweetly struck shot past the keeper from just outside the area.

Nathan Carlyle scored a superb fifth goal when he fired the ball into the net, after it took a slight deflection. As the players celebrated, the referee blew his whistle for full-time.

The Brentham Twitter page reported: ‘A fantastic day for us to remember as we celebrate 100 years of football. Attendance was 150 for an enjoyable match. Huge thanks to QPR for coming and extra thanks for cleaning the changing-room afterwards. Good luck for your season ahead.’

And good luck to Brentham FC for the coming season.