The following article appeared in Lloyd’s Weekly on 6th November 1887:

‘The Lord Mayor yesterday afternoon dedicated to the free use of the public for ever a recreation ground at Kilburn, which by the special permission of her Majesty, will be known as Queen’s Park.

The ground will be readily accessible to the large population of North Paddington, and to the inhabitants of the North-West of London generally.

The park, lying between Kensal Green and Queen’s Park stations, is 30 acres in extent, and was the site of the show of the Royal Agricultural society at Kilburn a few years ago.

A large portion of the new park will be available for playing cricket and lawn tennis, while there will be a gymnasium. 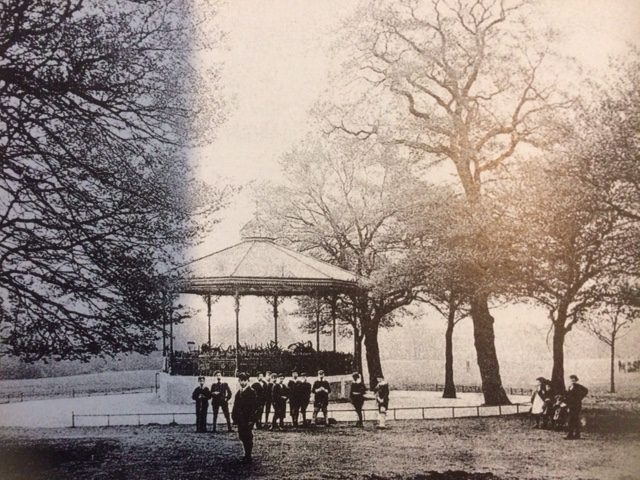 The ground has been conveyed to the Corporation of London, for the public use by the Ecclesiastical commissioners.

The funds at the disposal of the Corporation for preserving open spaces, derived from a duty granted for 30 years, in 1872, of 3-16ths of a penny, payable on every hundredweight of grain coming for sale into the Port of London, being already hypothecated, the means for the maintenance of the Kilburn park have been obtained from a bequest made by the late Mr William Ward, a citizen of London.

The Lord Mayor (Sir Reginald Hanson) drove in State, accompanied by the Sheriffs (Major Horatio Davies and Mr W. A. Higgs) and Under-Sheriffs Beard and Rose-Innes, to Kilburn, and on arriving at the entrance to the new hall was received by Mr E. J. Stoneham (the chairman), and other members of the Coal and Corn and Finance committee of the Corporation, and by Mr F. A. Wood (chairman of the Willesden Local board).

There was a large assembly of spectators, and the civic party walked through the park to a temporary platform. Here was a guard of honour of the Victoria Rifles, with a band of the regiment.

Mr Stoneham made a preliminary statement, explaining that the open spaces entrusted to the care of the Corporation now consisted of an area of no less than 6,432 acres, including Epping Forest, 5,347 acres.

The Lord Mayor said that a strong wish having prevailed that the memory of the Jubilee year should be perpetuated in connection with this new open space, her Majesty, in response to an application, had commanded that the ground should be called “Queen’s Park”. He then declared, amid cheers, “Queen’s Park open.”

On the proposition of Mr F. A. Wood, seconded by Mr G. Higgs, a vote of thanks was passed to the Lord Mayor, who in reply, said that as he walked there someone seeing him in his State dress called out, “Here is a Guy” (laughter).

He could only say that he would not mind being a “Guy” on the 5th November for years to come on a similar useful occasion (cheers). After planting a tree, the Lord Mayor, with the civic retinue, drove back to the City.

In the evening the members of the Coal and Corn and Finance committee of the Corporation, with a number of guests, dined in celebration of the event at the Guildhall tavern, Sir R. Carden, in giving the toast of: “The Army, Navy, and Reserve Forces”, mentioned that he belonged to the army before the Queen or Duke of Cambridge was born.

Mr J. Aird MP, replied for “The Houses of Parliament” and the Lord Mayor, responded to the toast of his health, alluded, as a resident of North-West London, to the rapid growth of population there, and the necessity for an open space in that part, observing that the pond in which he used to bathe his dog was now built over.

Other speakers advocated the renewal of the coal dues for public improvements and acquiring open spaces.’

There are two festivals held annually in the park; Queen’s Park Day in September and there’s a book festival in June.