I had travelled up to Hillsborough on the train and packed in the away end were 7,360 R’s fans with others scattered around the home areas. The following match report later appeared in the press:

‘This game saw Rangers enduring a season packed with so many highs and lows, win in style.

For the third game in a row manager Ian Holloway named an unchanged line up: Camp was in goal behind Edghill, Carlisle, Rose and Padula. The midfield four were; Ainsworth, Johnson, Bircham and Rowlands, with Gallen and Furlong in attack.

Rangers flew out of the traps and could easily have been three or four goals up within the first 10 minutes had they been a bit calmer in front of goal. Bircham, Rowlands and Furlong all saw great chances come and go, as Wednesday could not get close to them in a frenetic opening period.

The tension began to rise in the Leppings Lane End as a fear that so many missed chances could cost Rangers began to sweep over the fans.

Wednesday had started to create some chances of their own now as Carlisle began to look shaky and Matthew Rose was doing all he could to cover for his colleague.

At the other end chances were still coming and Gallen twice tried his luck. First he hit a shot from the edge of the area that flew well over the bar and then registered Rangers’ first shot on target with a low effort that Pressman dived to save.

However, his next effort was far more clinical and gave Rangers the lead their pressure had so richly warranted.

Gareth Ainsworth careered down the right and sent in a ball that both Rowlands and Furlong had a go at but could not convert. A Wednesday player got a half block on it, but could only send the ball into the path of Gallen and he rammed it high into the net to send the Rangers fans into a frenzy.

Ainsworth then came within a whisker of making it two only minutes later with a trademark volley. Pressman dived full length across his goal and was grateful to see the ball whistle past the upright rather than inside it.

As the half-time whistle approached, Rangers suffered a blow when Carlisle went over on his ankle and was forced off the field. Gnohere replaced him, but had little chance to get into the game before the whistle went for half-time.

Rangers made a brilliant start to the second-half when Furlong doubled the lead after barely three minutes. Bircham picked him out in the box and in one fluid movement he killed the ball on his chest, rolled defender Chris Carr and slammed the ball right-footed past the helpless Pressman.

Rangers’ fans were in raptures now and with one foot planted firmly in Division One they roared the team on. 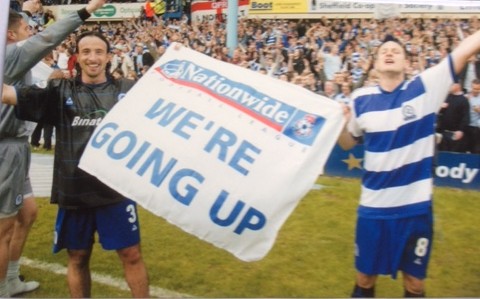 Suddenly, though, there was a change in the flow of the game as the Sheffield Wednesday midfield began to overrun the Rangers quartet and create some chances of their own.

Time and again Matthew Rose had to step in to quell an attack before it got into a really dangerous area, but such was the pressure it only seemed a matter of time before the Rangers defence would be breached.

Chris Brunt, an impressive thorn in Rangers’ side all afternoon, ran in from the left and managed to evade the attentions of Edghill, Ainsworth and Bircham before feeding Robins on the edge of the box.

He in turn picked out Jon Shaw and he drilled a low finish past Lee Camp to jangle the nerves of Rangers.

It was time for a response from QPR, but Wednesday kept coming. Padula managed to block out another effort from Shaw and Rose made a crucial intervention when Robins managed to break clear on the Rangers left.

Just when it looked as though a Wednesday equaliser might be on the cards, Rangers’ luck for the season finally turned. The slice of good fortune came courtesy of former Rangers trialist Chris Carr.

When Martin Rowlands accelerated down the left and smashed in a wicked cross, nobody could have foreseen what would happen next, as Carr stepped forward and took an almighty hack at the ball to send it flying past Pressman to seal the victory that Rangers needed.

There was now 20 minutes to go and Rangers kept coming forward. The introduction of Jamie Cureton for Rowlands with 10 minutes to go, put a little fizz into the team.

He was bright and energetic and tried to get the ball down and run with it at any opportunity.

At last, the referee finally brought the game to an end and Rangers had won by three goals to one.’ 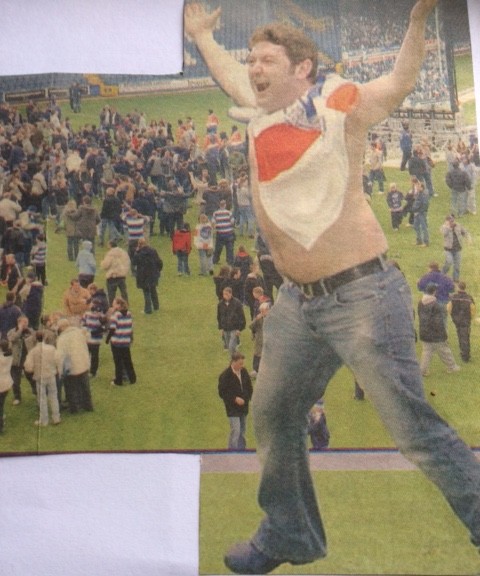 Meanwhile, 5,020 Rangers fans celebrated at Loftus Road for the beam-back.

Ian Holloway was quoted as saying after: “Every dog has its day and today is woof day. That might sound silly, but I want to go away and bark.”

Marc Bircham on what it meant to him: “It’s hard to put into words what promotion means to me as a player and a fan. Losing at Wembley twice in the 80’s, getting relegated from the Premiership, losing in the play-offs last year – and now at long last we’ve got something to celebrate.”

“To support the club as a boy and find myself being carried shoulder-high after winning promotion, with thousands of QPR fans singing my name is unreal. I have to say I was very emotional.”