The following article appeared in the Birmingham Daily Post on 20th October 1972:

‘Dave Thomas moved from Burnley to Queen’s Park Rangers for £165,000 in a lightning transfer deal yesterday, and afterwards both club managers expressed their satisfaction at the way the move had been handled.

Rangers manager Gordon Jago said: “I have nothing but praise for Jimmy Adamson, Burnley chairman Bob Lord and Dave Thomas for the way this deal was conducted.”

The action began when Jago contacted Burnley on Wednesday afternoon: “I thought Thomas would be way out of my price range, but the answer was ‘yes’ and the player travelled to London later in the evening,” said Jago, who met Thomas and completed the signing around midnight.

“If Burnley had turned down my bid I wouldn’t have told anyone about it because it could have upset Thomas.” 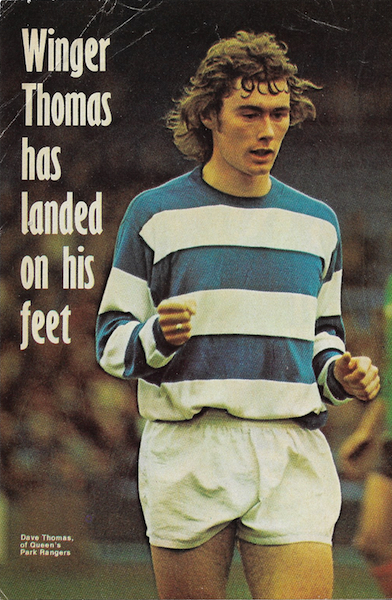 Adamson criticised managers who publicly praise young players with other clubs causing them to feel unsettled.

“Thomas has been unhappy for a while,” he commented. “I blame the system and one or two managers who have made comments which have unsettled him.”

“One manager in particular described Thomas as the finest prospect in Britain – yet this manager has never made an offer for him. When players hear such remarks they expect to go to one of the big clubs for a big fee and collect their five per cent.”

Thomas has left a side leading the Second Division for a club in second place and he was clearly impressed with the set-up at Loftus Road and Rangers’ chances of going up into Division One.

“They are the best team Burnley have played this season,” he said: “We were lucky to get a point off them.”

“I wasn’t happy at Burnley, and I thought I had nothing to lose by moving.” He plans to marry at Christmas.

Thomas makes his Rangers debut at Loftus Road on Saturday against Sunderland. Jago said: “He will play his own game and we’ll play around him. He can express himself on the field just how he wants.”

With his signing of Thomas, manager Jago has lost no time in finding a replacement for midfield player Martyn Busby, who broke his right leg at Fulham on Tuesday night.’

Rangers went on to beat Sunderland 3-2, with two goals from Stanley Bowles and one from Don Givens.