It was announced in a 1968 edition of “The Football League Review” (their official journal), that R’s fan (& Loft Boy) Freddie Mason had won their ‘Fan of the Week’ award:

‘Fred Mason (17) has seen most of the country in the last few years. He knows the major roads and motorways like the back of his hand…he knows where and how to hitch lifts.

In the last few years Fred has thumbed his way round most of the country to follow his favourites, Queen’s Park Rangers. Three years ago he decided hitch-hiking was the cheapest way of travel.

“I haven’t missed many games in that time,” says Fred, of 28 Shepherd’s Bush Road, London W12. “My longest trips have been to Workington and Dundee for two friendly matches – five days that took. My scarf is a big help and gets me lifts from other Rangers’ fans and lorry drivers interested in football.”

Last season he thumbed his way to all Rangers’ away games, totting up some 8,000 miles. “I only saw the last half-hour of the match at Blackburn, but it was worth it – we won 1-0.”

When we talked to Fred Mason – winner of this week’s ‘Fan of the Week’ award, he was setting off for West Bromwich, one of his new destinations this season, with Rangers in the top sphere for the first time.’ 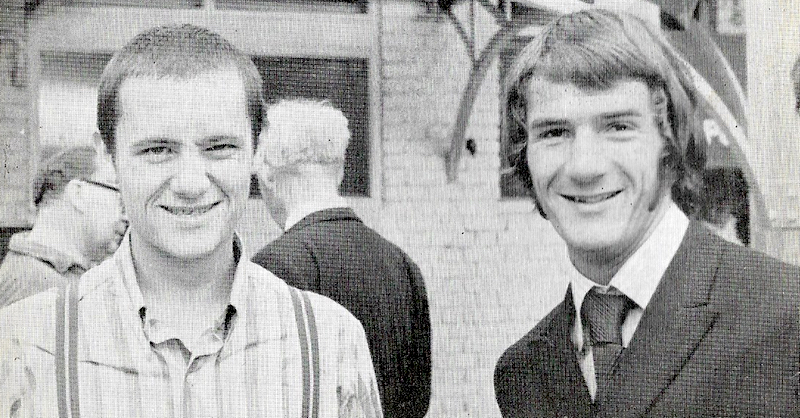 Not sure whether Freddie had won the award a second time as the caption in the August 1969 Blackpool home programme stated:

‘Supporter Fred Mason of 28 Shepherd’s Bush Road, won the “Football League Review Fan of the Week” award at the end of last season and received a week’s holiday in Pontins Holiday Camp. Here he receives a further prize – his photo taken with Ian Morgan.’

I remember Freddie from those days and I think Freddie at the time was a courier. I also recall Freddie’s Mum travelling to away games on the Supporters Club coaches.

Haven’t seen him for many years, I wonder if he still goes?