The following article appeared in ‘The Stage’ on 17th October 1963:

‘It does not seem possible that it is six years since the Gateway, one of London’s most durable little theatres, finally gave up the ghost, but La Paloma Club, which inherited the premises, held its anniversary party last Friday and the management solemnly assured me that they had been ensconced in Westbourne Grove since 1957. 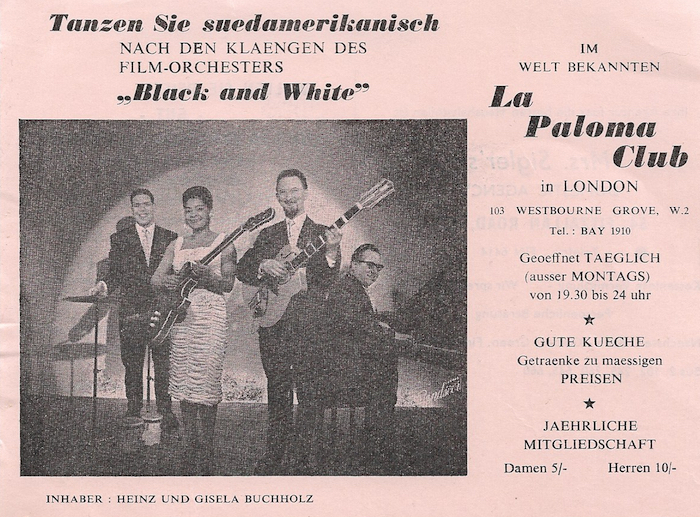 Primarily a dance club much favoured by foreign students, au pair girls and the like, La Paloma believes in a cabaret for that special occasion and this anniversary seemed a fitting time to introduce a remarkable Spanish entertainer, Juan Palomo.

Possessor of a dazzling personality, with a wardrobe to match, this gay caballero from sunny Seville has a vibrant voice, which sends “Granada” ringing out loud and clear.

Better still for novelty appeal is a number, which can be loosely translated as “Flamenco Rock” which has the spirit of Spain stamped all the way through, and one of those hand-clapping opuses which shows that Juan, despite an almost complete ignorance of our tongue, needs no such knowledge to make his presence felt.

Michael Delgado was also on hand to impart a Brazilian air of festival with his lilting songs and I also liked the versatility of the resident band, co-led by pianist Jack Gordon and guitarist Ronnie Wilkins, who switched from the Twist to the Samba at the shake of a maraca.’

Then on 4th March 1965, ‘The Stage’ noted that the Chalet Suisse Club in Charlotte Street had been taken over by Heinz and Gisela Buchholz of the La Paloma Club.

So the club had been running for eight years, I wonder when it closed and who else performed there?

(Thanks to Colin Woodley for unearthing both articles for me. The leaflet is from my collection)