On 19th February 1955, the Rangers took on Norwich City at Loftus Road. The following match report appeared later that day in the Eastern Football News (the Pink Un):

‘In Artic conditions that made the lot of both spectators and players extremely unpleasant, Norwich City went down by the odd goal of three to Queen’s Park Rangers at Shepherd’s Bush this afternoon. But they put up a great fight before admitting defeat.

When Brennan equalised two minutes after the interval – Angell had given Rangers the lead early in the match – it seemed that the Canaries might even take two points.

Rangers recovered well, however, and a goal by Cameron 16 minutes from the end settled the issue.

Snow throughout the first-half hampered both sides and the players were continually sliding about on a pitch like a skating rink.

Snow was still falling when the teams came out. With Foulkes out of the side, Ashman took over the captaincy. He lost the toss but Morgan soon sent Kearns away, the centre-forward forcing a corner off Woods. From it the ball went to McCrohan, who sent a header inches over the bar.

Conditions were obviously extremely difficult, but City held the upper hand for a time until a clearance found Clark Norman relieving pressure by putting into touch.

In Rangers’ next attack Wilson conceded a corner, and then from a free kick Smith first hit the City “wall” and then put the rebound well wide.

Rangers kept up their attack using their left-wing repeatedly and Carberry gave away another corner in attempting a pass back to Oxford after a mix-up with Wilson.

Mistakes could certainly be excused on this surface, but for the first ten minutes or so Rangers looked the better team and Clark brought a good diving save from Oxford with a hard low shot.

Soon afterwards Smith blazed high over when given a good opening, and City’s replies had so far been restricted to a fruitless chase after long balls down the wings or centre.

The pressure was eased when a free kick was given when Carberry had his feet swept from under him.

A neat move involving Brennan, Kearns and McCrohan left Chung with the ball, but the inside man’s final pass to Reagan was cut off.

Rangers had two more free kicks. First Cameron shot high over the bar and the second was cleared easily.

It was in the 14th minute, however, the Rangers took the lead. They had the wind behind them and snow at their back, and when Angell fired in a long effort from nearly 40 yards, Oxford appeared to move too late and the ball curled past him straight into the net.

This was the sort of thing that could easily succeed in the conditions and Rangers, for a time, kept up their pressure.

Norman distinguished himself with several good stops and finally a mistake by Powell put Kearns away. The centre-forward passed out to McCrohan, but the latter’s centre was easily taken by Brown.

City were now having a little more of the game and a perfect pass by Brennan found Chung. Chung ran on and tried a shot but upped the ball and Brown had no trouble in saving.

Soon afterwards Shepherd met the ball from the right first-time and sent a fierce shot inches wide of the near upright.

Norman was doing a grand job in the City defence and repeatedly held up the Rangers attack.

Another corner to the home side threatened danger. Oxford finally dropping on the ball and when Chung, trying to force his way through, was brought down, Norman’s free kick gave Rangers an anxious moment before Brown cleared.

Oxford was again tested with a long shot, this time from Nicholas, but he made no mistake, taking the ball cleanly.

City, in turn, attacked smartly and the combined move ended with Reagan gaining a corner.

Oxford punched away a dangerous-looking left-wing centre and then Rangers had another flag-kick on the left, Smith heading over.

Norman was here, there and everywhere, but both Clark and Smith went near, one with a header and the other a shot.

Then, after City had forced a corner at the other end, Oxford flung himself forward to take the ball off Kerrins’ foot as the winger tried to convert with a centre from the left.

A minute or so before the interval, in fact, Kearns made a grand pass to Chung and the latters hard shot was brilliantly tipped up and collected by Brown. Just before this Morgan had to receive attention, but soon recovered. Half-time: 1-0. 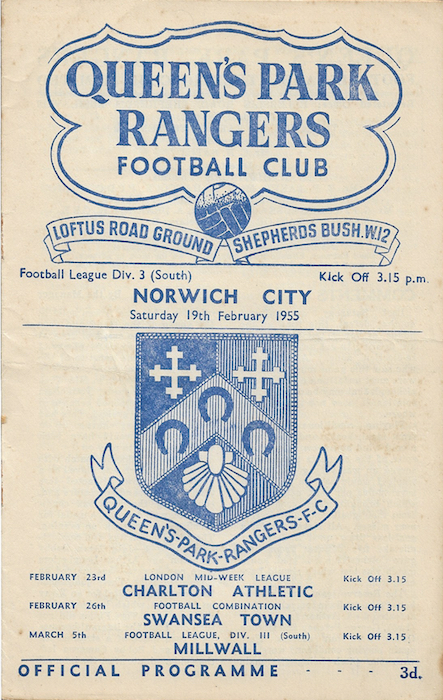 City had done well to keep the home side to a single goal and with the snow at their backs after the interval they had the chance to make a second-half recovery.

They started with an attempt to force their way down the right, but this raid was soon repulsed and Rangers in turn were sent back by the City defence.

Two minutes after the restart, however, the Canaries were level. Morgan planted a long ball into the middle, Kearns nodded it back to Brennan and the inside-left’s shot through a bunch of players, was fumbled by Brown and rolled into the net.

This evened up the goalkeeping errors and Oxford was soon given another chance to show his skill. First Wilson headed what looked a certain goal off the line for a corner, and from this Oxford brilliantly touched over the bar a neat lob from Shepherd.

City too, had another flag-kick following a good through pass by Ashman and from it Chung put in a header that was not far over.

Rangers were not looking anything like so effective now and after Chung had gone sprawling in the home penalty area, City had a free kick taken by Brennan from which Brown could only fist out an Ashman header.

It was City who were now looking the more impressive in attack, but Rangers retaliated down the right, where Kerrins was brought down by Morgan on the edge of the area. The free kick caused City some trouble and for a time Rangers swarmed around their goal.

A neat move between Brennan and Reagan was ended by a Powell interception, while the nature of the surface was shown by a long-range Rangers effort that skidded past a surprised Oxford – and also fortunately, past the far post.

Oxford was several times in action, once taking a low drive from Smith, but generally play at this stage was not producing much real danger to either goal.

The City keeper dived brilliantly at Cameron’s feet to save, however, when the inside-man appeared to be clean through.

It was Cameron, nevertheless, who gave Rangers the lead again in the 74th minute. The ball came over from Kerrins, touched Clark in transit, and, with the City defence in a tangle, Cameron shot hard into the net from close range.

Ten minutes from the end Carberry fell heavily after heading the ball, but was soon revived.

Several times City tried to force their way through via Kearns, but there was little sting about their attack and the bulk of the work was falling on the defence.

Almost the whole team came up for a free kick by Ashman after “hands” by Nicholas, but this threat, too, was easily checked and then Oxford brought off the save of the match, turning over the bar a fierce free kick by Smith from the edge of the penalty area.

Ashman was trying his hardest to get City on terms again, but his efforts failed to find a way through the Rangers defence, and Cameron was not far wide with a hard drive before Oxford made another brilliant diving save.

He followed this in the closing seconds with yet a further tremendous effort, flying through the air to put a shot from Smith behind for a corner.’

The match programme gave notice that the next dance was to be held at the Porchester Hall in Paddington. Tickets were priced at 4/6 and supplying the music were ‘Billy Finch & his Ragamuffins’.

The R’s travelled to Southampton the following week and recorded a 2-2 draw, with goals from Willie Clark and Ernie Shepherd.

(The newspaper and the programme are both from my collection)