Rangers had suffered a 1-6 defeat at Griffin Park on the opening day of the season, which was followed by an impressive 4-1 home win over Brighton. Five days later the R’s went down 1-2 to Mansfield Town at Loftus Road.

QPR then travelled to Hull on 4th September and Brian Taylor filed the following comprehensive match report for the local Daily Mail:

‘What a comedown! What a let down!! After last Wednesday night’s champagne match against Swindon, this clash – if clash be the word – against Queen’s Park Rangers was like flat beer.

Looking sluggish and dispirited, the Tigers were two goals down in 10min, both of them scored by inside-right Les Allen, after astute use of the open space.

In the 32nd minute, Roger Morgan got a third for Rangers, and with this goal, and the first, keeper Maurice Swan did not look entirely blameless.

A goal by Chilton in the 66th minute brought some life and fire into the Tigers’ football, but City seldom looked the same team that they were against Swindon.

In the closing-stages, the Tigers forced a few anxious moments in Rangers’ goalmouth, but they always found it packed and hard to force a way through. They lacked the polish and crispness to open any gaps.

For Rangers this was their first victory in Hull in ten visits and the first time, in fact, that they have scored more than one at Boothferry Park.

City brought in Maurice Swan in goal for his first senior game since last December – apart from the Brian Bulless testimonial match at the end of last season.

Len Sharpe continued at left-back in place of Dennis Butler, who has not yet recovered from injury.

The crowd looked rather disappointingly below the size of Wednesday evening’s 23,000 when the Tigers kicked off.

The Tigers looked rather casual in their approach in the early stages and Sharpe had to cover hurriedly and give away an early corner.

In the second minute a long throw-in by Langley caught the Tigers napping and Allen streaked in to poke the ball into the net, underneath Swan’s diving body.

The Tigers were shaken up by this goal and quickly hit back with Chilton cutting in from the left-wing and forcing Springett to turn the ball away for a corner.

Langley had to head behind from a corner when Summers swung over a good centre after a neat bout of passing.

City won their third flag-kick when the cross was headed straight behind again and they were really turning on the pressure in their bid for a quick equaliser.

Wagstaff raced away after beating Hunt and put in a low cross from the dead-ball line. Houghton was just unable to get to the ball, however.

Rangers scrambled the ball away into mid-field and after three attempts by City to get moving had failed because of inaccurate passing, Rangers swept in with a simple second goal.

Hazell sent Allen through a huge gap with a perfectly timed pass and the former Spurs centre-forward coolly slipped the ball past Swan. 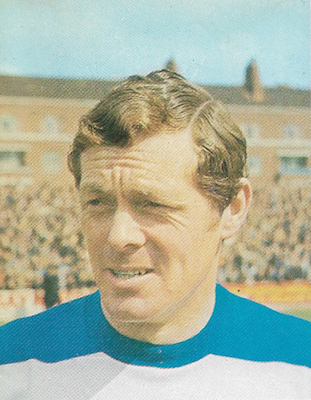 Rangers, having scored two goals, which was twice as many as on any of their previous nine visits to Boothferry Park, were quick to fall back on defence at the slightest hint of an attack by the Tigers.

City’s forwards, in consequence, were finding it difficult to carve openings for themselves and when Chilton tried a long-range shot, there was no power behind it and Springett saved easily.

From a throw-in on the right, Heath swung across a fine centre and Butler responded with an equally good header. It looked as though the ball had been pushed behind by Springett, but referee Hamer awarded a goal kick.

The Tigers were looking sluggish, particularly compared with their fine display last Wednesday and again and again their passes were going astray.

Rangers provided a blanket cover around the penalty area and though Summers and Simpkin were both able to go up and join the attack, Springett was not often troubled. Summers could get no power behind a header and the keeper saved easily, but then, when the left-half sent in a hard volley, the ball flew straight into Springett’s arms.

Wagstaff and Chilton were taking it in turns as usual to bore down the middle, but the service they were getting was far from good.

On top of this the Tigers in their efforts to find a way through were overdoing their passing, because there were few open spaces to exploit, and time and again moves ended with a vigorous interception by a Rangers’ defender.

Because the Tigers were given so much freedom to attack, Rangers often looked dangerous when they broke swiftly out of their own penalty area, because City’s cover was a little slow in falling back.

It was one of these quick breakaways that brought a third goal in the 32nd minute. Roger Morgan was sent racing past Davidson, and though Swan positioned himself well, he was not entirely blameless in failing to stop a rather tame-looking drive by the left-winger.

Rangers might have had another goal a couple of minutes later after yet another slap-happy piece of work by the Tigers. McAdams was left all on his own in the penalty area, but he fell over the ball and Swan was able to come out and collect.

The crowd were getting restless for City to show their real form, but the harder the Tigers tried, the more bungling and mistake-ridden they became.

Chilton looked to have a fine chance after a bout of inter-passing, but failed to control the ball and Rangers, as was happening so often, stepped in to boot the ball away.

It was really remarkable that the Tigers could play so ineffectively after Wednesday night’s wonderful display. All the snap and polish had gone out of their game, passes were going wildly off-target and tackles were being made timidly and tamely.

Just before the interval, Chilton brought a cheer – one of the few – when he got in a low shot from a Wagstaff pass, but Springett saved without a great deal of difficulty and the first-half honours had unquestionably gone to Rangers, who were much more spirited and purposeful. Half-time: Hull City 0 – QPR 3.

As it was to be expected Rangers looked quite prepared to sit tight on their 3-0 lead in the second-half.

In the first 10 minutes, the Tigers managed only two direct threats on Rangers’ goal. Wagstaff sent a snap-shot over the bar and a Chilton header from a centre by Davidson went just wide.

Just after this, Wagstaff barged the keeper over the line when Summers chipped the ball into the goalmouth, but quite clearly the keeper was up in the air at the time, and referee Hamer had no hesitation in awarding a free kick.

Midway through the second-half the crowd began slow handclapping and howling for some action from the Tigers. It came in the 66th minute when Chilton reduced the arrears from a corner by Heath.

The ball was touched on to Chilton by Ian Butler, running in to the inside-right berth, but Rangers’ players protested that Chilton had handled in controlling the ball – and there looked to be justification for their protests.

Nevertheless, the goal stood and it served to inject a little more life into the Tigers.

The Tigers had another narrow escape when Collins worked the ball down the right-wing and pulled it back for the former Willerby Old Boy, Keith Sanderson, to try a shot. He hooked the ball well wide, however.’

Hull still went on to win the title, Brentford were relegated, and the R’s finished third, whilst Les Allen notched up an impressive total of 33 league and cup goals.

Happy 81st Birthday Les, and thanks.