On 10th January 1914, Rangers took on Bristol City at Park Royal in the 1st Round of the FA Cup.

Tragically 21 QPR fans were injured on their way to the match in a Motor Bus accident. The following article appeared in ‘The People’ (described as a weekly newspaper for all classes):

‘An alarming motor-bus accident, resulting in injuries to 21 passengers, occurred yesterday afternoon at the junction of Chesterton Road and Ladbroke Grove, Notting Hill.

The bus was one of three chartered by a number of employees of Messrs Davis and Son, dyers and cleaners, of Kensal Works, Upper Westbourne Park, and their friends.

They were proceeding to Park Royal to witness the football match between Queen’s Park Rangers and Bristol City. There was a full complement of passengers inside and out.

As the bus was crossing Ladbroke Grove another vehicle came in the opposite direction, and the driver of the bus endeavoured to avoid it, but as he applied the brakes the bus skidded owing to the greasy state of the road, struck the kerb, and overturned on the pavement, just outside the Earl Percy Hotel.

There were heartrending cries, and a number of people immediately rendered willing assistance. The passengers who had sustained injuries were taken into the hotel, where their wounds were dressed by a number of nurses from an adjoining nursing home.

Later, several of the most serious cases were removed to the Marylebone Infirmary, a quarter of a mile away. 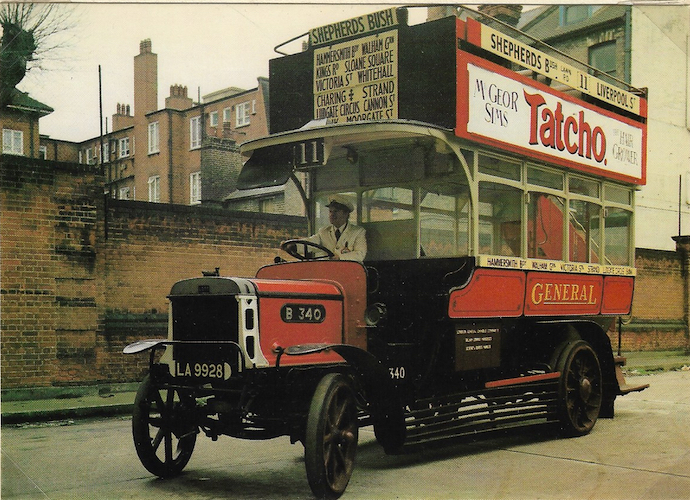 (The above pic shows a No.11 bus, which was typical of the period)

The names of the seven injured persons who were detained at the Marylebone Infirmary were:

The most serious case is that of Westall, but it is thought he will recover. The wife of Store was also among the injured, but she was not detained.

Mr B. Haskins, who is proprietor of a cycle and gramophone stores, told a “People” representative the following story:

“I was the first one on the scene. I was in my shop when the accident occurred, and I heard the screams. I rushed out and then saw the bus lying on its side near the Earl Percy Hotel.”

“My first act was to assist the driver, who was lying with his head among the broken glass. He appeared to be suffering from shock. I assisted him up, and then shut off the motor of the bus.”

“The driver behaved very pluckily, and though totally unfit to render assistance, expressed a desire to help the injured. He was, however, persuaded to go to a doctor’s surgery near by.”

“I saw an elderly man lying on the ground apparently severely injured about the head. Nurse Feast, who lives close by, arrived on the scene with water and bandages and attended to the old man’s injuries, and he was afterwards taken to the infirmary on an ambulance.”

Mrs Haskins was also interviewed by a “People” representative. She said the bus skidded for some distance.

“It appeared to wobble first of all,” she said. “I knew there would be an accident. I screamed before the bus actually overturned; it appeared to skid towards the kerb and the wheels striking the kerb caused the bus to overturn.”

Mr W. J. Alabaster, proprietor of the Earl Percy Hotel, said he was in the bar of the hotel when he heard a terrible smash. He looked up at the windows thinking they had been shattered, but he then heard screaming and rushed out.

Then he saw that a bus had been overturned and people were helping the passengers who had fallen with it.’

As for the game, it finished 2-2 with goals from Jimmy Miller and Jimmy Birch, with 18,000 attending the match. Rangers went on to win the replay 2-0 five days later.