The following newspaper article appeared in the West London Observer on 8th November 1957:

‘Free drinks were available to customers who visited a new public house which was opened at the White City Estate on Wednesday. The new “local” is called the ‘Springbok’ and is in South Africa Road.

For the opening many local residents as well as representatives from nearby offices and factories, including the BBC and the Royal Marine Reserve HQ, were present.

A feature of the decoration in the bars are pictures and photographs which either depict famous sporting events which have taken place at the nearby White City Stadium or show landscape views of South Africa.

In one of the bars the walls are decorated with coats of arms of football league clubs under which are inscribed the clubs nicknames. 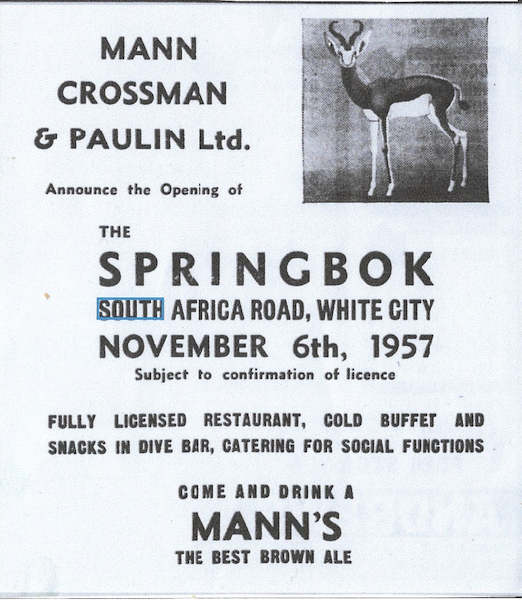 The premises include public, dive and lounge bars as well as restaurant facilities and rooms for private hire.

The house owned by Mann, Crossman and Paulin Ltd., will be under the management of Mr and Mrs H. S. McLuskie.’

It was also briefly known as ‘McQueens’ and I remember the fans anti-merger meetings being held upstairs in 1987.

The pub is situated at: 121, South Africa Road, just yards from the Loftus Road Stadium, and after reverting back to its original name, it became the ‘Queens Tavern’ a few years ago.