Rangers signed Evelyn Lintott from Plymouth Argyle in 1907 and he made his debut later that year against New Brompton on 7th September.

On 7th December, Lintott’s international career began as an amateur against Ireland and he went on to gain a total of five caps.

He made his full international debut, also against Ireland, in Belfast on 15th February 1908. Lintott played twice more for his country whilst with Queen’s Park Rangers.

After making 35 appearances for the Rangers, Bradford City snapped him up in November 1908. The following article appeared in Pearson’s Weekly on 9th September 1909:

‘The lot of the man who tries to serve two masters is rarely a happy one. However skilfully and satisfactorily he may work for each, one of them almost invariably starts to “kick” before long.

E. H. Lintott, England’s famous stock left-half back of the last two seasons, has recently had disagreeable proof of the truth of this statement.

For the greater part of last winter Lintott was engaged by the Bradford City club as a footballer, and at a north London school as a teacher.

Football claimed him on several mid-week days, and although he provided and paid out of his own pocket an efficient substitute for the few occasions on which he was away from his class, his conduct was deemed so serious that, after a lengthy discussion of it, it was decided that if he wanted any afternoons off in future he must submit a request for them to the whole of the powers that be of his school!

The thought of the local education committee sitting in solemn conclave to discuss whether a man shall or shall not be allowed to go and play in a football match borders dangerously on the ridiculous.

But whether Lintott manages to turn out as frequently as in previous seasons or not is of relatively small account.

He has already made secure his position among the ”big” players of the day, and so long as he keeps fit and in form his place in his club’s and his country’s sides is not very likely to be filled by another.

True, he is not a really great left-half in the sense that Crabtree, Needham, and Jock Robertson were. He lacks that touch of innate genius that these players had; he does not seem to divine the thoughts and intentions of his opponents as they did.

But for downright good solid “plug,” for that determination to succeed which overcomes most, if not all, obstacles, for genuine enthusiasm, Lintott has no superior and few equals. Rarely do you see him mastered.

His quickness of foot and body in turning, his pace in running, and his ability to get to the ball, whether it is on the ground or in the air, is mostly too much for those against him.

At one time he had a rather unpolished, “tear-a-way” sort of style, but latterly he has quietened down a lot, and now, if not exactly a stylist, he is, at any rate, far more cool and calculating than he used to be.

He is a very versatile player, too, and although he prefers centre-half, and usually plays there for his club, it is on the left that he has gained his representative honours. 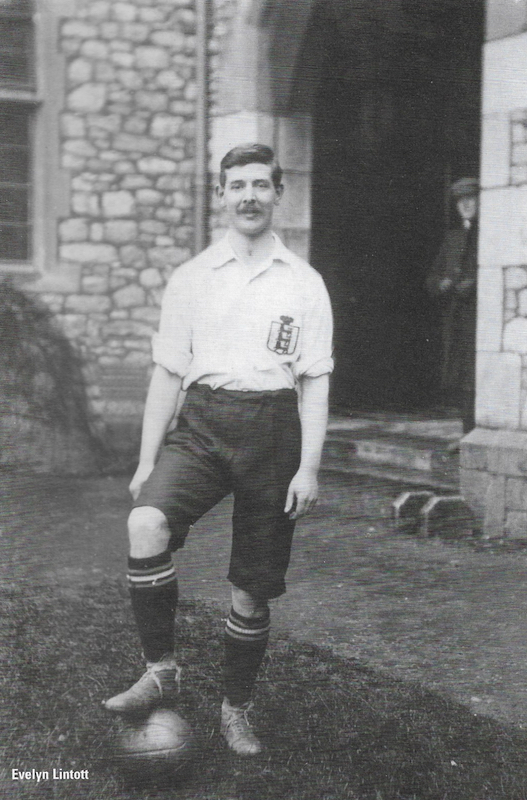 Here his “bottling-up” methods have rudely disturbed the serenity of more than one international right wing pair, and he shares with James Sharp, Fulham’s great back, the distinction of being one of the two present-day defenders who can generally be depended upon to hold Meredith, “the Wizard of Wales”, in check.

In the 1908 England-Wales match, which England won by a 7-1 margin, Lintott was so persistent in his attentions to Meredith that at last the latter got so exasperated that he turned to him and growled, ”For goodness’ sake go away and leave me alone, man! You’ve got six goals – isn’t that enough?”

Before he joined his present team Lintott played for Plymouth Argyle and Queen’s Park Rangers as an amateur. A year ago he signed his first professional form for the last-named club, from which he was transferred to Bradford City in order to help keep that team in the First Division of the League.

And as they just “beat” Manchester City for one of the last two places in the final table by goal average, his engagement seems to have been justified by results.

An amusing story is told of a little comedy in which Lintott once played a very unwilling part.

It appears that after playing in a match one day he was, wholly against his will, taken under the wing of an enthusiast, who not only invaded the dressing-room, but also appeared at the table where the teams were dining in the evening.

For a long time he stuck to Lintott closer than any brother or limpet, and persisted in airing his views upon anything and everything, to the intense boredom of his “listener”.

At length the half-back seized an opportunity to escape to another room. But the enemy was almost immediately in full cry. And then followed the most ludicrous chase imaginable.

Hunter and hunted sneaked about in dark corners, looked behind doors, and peered into rooms, each from a different motive, until at length Lintott thought discretion the better part of valour and sought the safety of the nearest railway station!’

Lintott made a total of 7 full England appearances.

Sadly he was killed on the first day of the  Battle of the Somme after leading his platoon of the 15th West Yorkshire Regiment, ‘The Leeds Pals’, over the top.