Bob was born in Hampstead on 13th November 1949 and he gets an early mention in the final home match programme (v Exeter City) of the 1964/65 season:

‘New apprentice, Robert Turpie, 15-year-old inside or outside-left from Hendon, has signed apprentice forms for Rangers on leaving school at Easter. He has won representative schoolboy honours for London and Middlesex.’

Tony Currie later recalled in an interview on the Club website: ‘I first joined QPR on amateur forms when I was 14 or 15-years-old. Then, when I left school the club didn’t think I was good enough to sign as an apprentice. Instead, they signed Bob Turpie, who was a mate of mine and went to the same school as me.’ 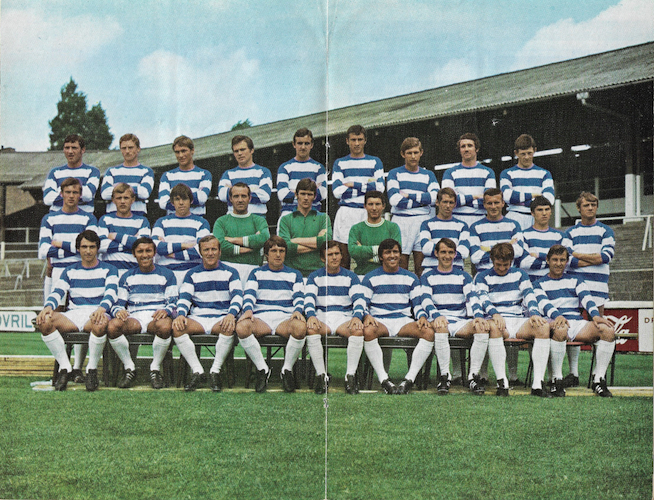 The 1966/67 Club handbook states that the previous season, Bob made 17 appearances for the QPR South East Counties Division One League side, and scored nine goals.

He signed pro-forms in November 1967 and during that season Bob played over 40 combined games for the juniors and reserves.

But it wasn’t until the 13th September 1969 that Bob actually made his first team debut when he came off the bench at Portsmouth. Mike Kelly was carried off in the second-half and Ian Watson took over in goal.

Incidentally, this was Gerry Francis’s first full debut after previously coming on against Liverpool in March 1969.

Bob went on to start the match at Blackburn four days later in a game that was also eventful. Mick Leach scored a late winner and Alan Spratley the R’s keeper, was attacked by a home fan!

Unfortunately no further first team appearances followed and in July 1970 he was transferred to Peterborough United.

Earlier this month a tribute in the Preston match programme stated: ‘His family are all Rangers fans – Bob being responsible for a good few generations of R’s supporters.’

(The above squad picture appeared in the August 1969 Hull City match programme and Bob is shown on the far left of the back row. Also thanks to Bernard Lambert, aka Kerrins, for his assistance)

4 thoughts on “In Memory of Bob Turpie”