Neil Murphy was QPR’s first full international. Rangers had signed him from Sheffield United in 1903 and he made his Southern League debut against Luton Town on 26th September.

He went on to gain his first cap for Ireland on 25th February 1905 against England at Middlesbrough. Neil was then called up to face Scotland in Glasgow the following month.

On 8th April, Neil made his third international appearance at Cliftonville against Wales. A report appeared in the Belfast Newsletter two days later:

‘The 24th international contest between teams representing Wales and Ireland took place on Saturday on the ground at the Cliftonville Club at Solitude.

It had been anticipated that there would be a big crowd of spectators, and the arrangements made by the obliging and energetic secretary of the Irish Football Association, Mr Jack Reid, were in every way admirable; but not more than 10,000 people were present, and the receipts only amounted to £397.

The match was a most important one, as it settled the relative positions of the countries in the international table, a victory for Ireland placing them second to England and a defeat putting them at the bottom, giving them the unenviable distinction of being the holders of the “wooden spoon”.

In the previous contests Ireland had been successful on nine occasions, Wales winning eleven, and three matches were drawn.

Our representatives’ average has been greatly improved in recent years, for we have defeated the men of “gallant little” Wales in the last three games, while out of the eight contests since 1896 – when in a memorable contest at Wrexham, we got a terrible drubbing to the tune of six goals to one – we have six times emerged victorious.

Many changes have taken place in the football world since then, and while there is no doubt that we have improved in our methods and skill, some of the later reforms have aroused not a little discussion in the ranks.

The introduction of what are called in football slang “Anglos” into the international team, to the exclusion of men who are still playing with Irish clubs, is one of the points upon which there may be a difference of opinion, but it may be pointed out that the other countries pursue that course apparently with benefit to themselves.

Apart from the questions of football ethics and legislation, however, there is reason for congratulation that both from the players and spectators standpoints the game has made good progress, while the area of its influence is constantly spreading.

Saturday’s match was fought out under pleasant atmospheric conditions, the weather being open and Spring-like, but the playing pitch had suffered greatly from the recent heavy rains, though obviously much attention had been bestowed upon it.

Despite the liberal application of sand there were patches, which were almost bog-like, and the whole surface was holding and heavy. Under these circumstances it was hardly to be expected that a fast and sound exposition of the game would be seen.

Spectators began to congregate on the ground long before the time fixed for the kick-off, and a frequent tram service enabled all to reach the place with ease and comfort.

The players turned out punctually to time, the home men, in Royal blue jerseys, coming first, headed by Kirwan, and the Welshmen following shortly afterwards in red jerseys, with E. Hughes leading. 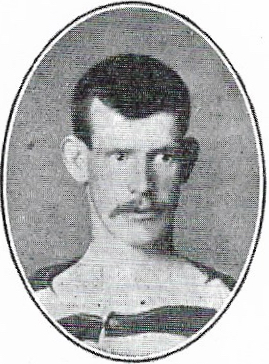 Kirwan won the toss for Ireland, and elected to play towards the mountain goal, there being little or no wind stirring.

Davies set the ball in motion, and immediately the home backs had their powers of defence tested. McCracken was badly beaten, but McMillan came to the rescue, and saved brilliantly, play being taken to the central line.

Here there was nothing to choose between the sides until Wales forced the pace, their forwards being judiciously fed by Morris and Blew, and a nice bit of combination enabled Watkins and Matthews on the right to get down to near goal.

Offside against the visitors relieved, and then Kirwan made tracks for the Welsh sticks, and with O’Hagan in close attendance, gave the backs a hot time. Kirwan rattled in a beautiful centre, which E. Hughes headed away.

A moment later the Tottenham Hotspur left-winger was at it again, and this time Morgan had to come out and defend, and immediately afterwards the right-wing troubled him, and again he saved cleverly and cleanly.

A bit of very exciting play followed, for Hunter and Maxwell had dribbled down, and the former centred accurately. Kirwan dashing through had an absolutely open goal, but somehow he managed to sky the ball, and a certain score was lost.

It was one of those unaccountable accidents that will happen with the best men.

After desultory play a foul against Murphy enabled the Reds to attack, and then Watkins completely outwitted McMillan, and opened the scoring with an unsavable shot eighteen minutes from the start.

The Irish right-wing quickly got to work, and after Hunter had sent the ball sharply across O’Hagan, had very hard lines in not scoring, a stinging shot from him striking the upright.

The home left-wing then took up the running, and both Kirwan and O’Hagan had attempts at goal, but Blew intercepted pluckily. The Welsh captain punted away, only to find Hunter come with a splendid dribble on the far side, and this time the clever little Distillery player had the satisfaction of seeing his beautiful centre met by Murphy in the goalmouth and headed into the net.

This, the equalising goal, was put on after twenty-five minutes’ play. Matthews and Watkins footed up smartly, and then the ball passed right across the front-rank line to Davies, Atherton and Jones, but the latter was fouled, and matters were very dangerous for Ireland.

Reynolds saved with great dexterity, and Connor came to the rescue, with the result that O’Hagan was let away. He very trickily outwitted his opponents, but an unproductive corner followed, but the home side had another very narrow shave when Watkins dashed in a hot one to Reynolds.

The Bohemians man was again able to save with great smartness. The reds were not to be denied, however, and back they came, this time per the left-wing, after Davies had set them going.

There was no mistake about their determination and when Jones slipped the leather through to Atherton, the speedy winger put plenty of force behind it, and with a right-down good one beat Reynolds, and gave Wales the lead.

Good play was seen, in which Connor and then Darling were conspicuous, but the home forwards lacked cohesion, and they appeared to play purely for their individual selves, while Murphy received an injury and limped off the field.

O’Hagan was cheered and applauded for a piece of gallery play, which certainly was not football, and then Kirwan made a failed attempt at goal.

The visiting forwards then had a chance, and McCracken and McMillan had both to exert themselves to the utmost. The latter cleared in great style, and Darling and Connor both displayed skill.

Morris, on the left, sent the home side back, but after a moment or two about midfield, Kirwan raced away, and quickly passing to O’Hagan in front of goal, the latter netted the ball with a grand high shot, which Morgan could not get at.

The first period of the game had been very keenly contested and exciting and though the turf was very sticky and treacherous the men had put in a ding-dong 45 minutes, which was bound to have taken a lot out of them.

When they resumed – Murphy coming out again on the home side – they went at it apparently, as fresh as ever, and O’Hagan first made Morgan handle. The Wrexham custodian very coolly got the ball away, but was again called upon to exert himself.

Then Hunter and Maxwell were aggressive, and when they had fairly beaten the defending backs, the latter lifted the leather high over the bar.

After clever and smart work by Connor, who was doing any amount of execution, he put Hunter in possession, and he sprinted up to Morris, who used his bulk and weight remorselessly.

A hard struggle resulted in Morris placing nicely to his forwards, and Davies made a rattling good run, which was checked by Connor, and then McCracken showed a glimpse of his old form – for the first time in the match.

Offside against Jones gave the home men breathing space, but a long period of absolutely uninteresting play followed, until McCracken enlivened it a little, putting his forwards on the attack by a nicely-placed punt.

Down swept O’Hagan and Kirwan on the uncovered stand side, and Richards and Blew were utterly powerless to stop them, and finally a good shot was sent in to Morgan.

The custodian, who had played a sound, consistent game, saved with the utmost coolness and decisiveness, and then Maxwell had a go at him, and the shot, which was a very hot one, struck the crossbar and bounced back into play.

It was about here that the pace began to tell, and there was hardly a kick left in some of the men, the heavy ground and fast game having given them a severe gruelling.

The enclosure, by the way, had worn fairly well except in places where the players had indeed difficulty in keeping their feet.

Ground was gained as the result of good passing and dribbling on the home left-wing, but there was little sting in the shooting, and the game was monotonous in the extreme.

Several times when Hunter had put in clever and tricky runs on the right, Morris pulled him up sharply, and once the referee intervened, giving a foul against the Derby County back. It was a good opportunity, but it was not taken advantage of, the ball being sent behind.

Wales then attacked chiefly as the result of grand work by the captain, E. Hughes, but “hands” against them afforded welcome relief to the home side.

Several opportunities came the way of Hunter, who however, failed to place the ball accurately, and, although he was playing a fine game up to a certain point, he seemed unable to cap his efforts by finding the goalmouth.

Morgan had to fist out once here, but the shot came from O’Hagan, who is so smart and “nippy” on his feet that he is inclined to overdo it and give the boys a chance to cheer from the gallery.

And so the game wore on, with never a gleam of excitement to wake up the spectators. All the life seemed to have gone out of the contest, and everybody made up their minds that a draw was to be the outcome.

Just before the call of time the home lot made a rather smart incursion to the Welsh goal, but J. Hughes sent them back, and the visitors swarmed around Reynolds, who beat them back manfully.

When the whistle went there was little to choose in the positions, and the game ended Wales….2 goals – Ireland….2 goals.’

Neil made 53 appearances for the Hoops, scoring 12 goals, before he moved on to Luton Town in 1907.