Rangers had started this 1964/65 cup campaign with a 4-0 home win over Reading, followed by a 4-2 victory against Luton Town and reached the final after knocking out Fulham. The young R’s were then set to face Tottenham Hotspur.

The two-leg final was scheduled to begin on 8th April at White Hart Lane but was rained off. The second-leg was to be played at the White City on Wednesday 28th April.

Turnstiles were opened at the junction of Wood Lane and White City Road entrances. The price of admission to the ground was three shillings and 1/6 for boys and old age pensioners. Transfer to the centre stands – Blocks G & H cost two shillings: 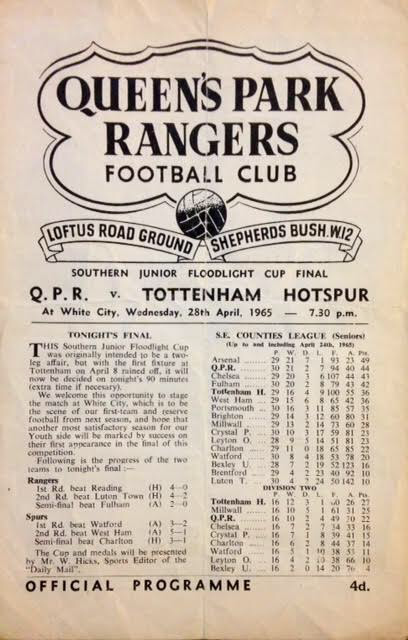 ‘After 120 minutes of gruelling football the young footballing talents of Rangers and Spurs agreed to become joint winners of the Junior Floodlit Cup and so hold it for six months each.

And what a fight these lads had put up. The tension in this action-packed game exploded into near-hysteria nine minutes from time when Spurs snatched their equaliser.

Rangers, who had dominated the game for so long, were leading 2-1 when Spurs earned a free kick outside the penalty area. Left-back Tony Want took the kick, the ball glided in from the dark areas on the wing, with Steve Pitt’s glancing header sending the ball swerving past keeper Brooks. Spurs had earned themselves a reprieve, and almost a victory.

The game started off in dismal weather conditions. A darkened sky and a steady downpour had frightened off the anticipated 4,000 fans and only 1,339 trickled through the turnstiles to lose themselves in the vast stadium. The pitch was so waterlogged that the players were almost paddling.

Rangers attacked first. A quick free kick gave Adams a chance but Spurs’ keeper Skeet came out fast to save. Then Spurs came away and John Brooks did well to save a low drive from Pearce following a corner-kick.

Both teams were a little subdued in the early stages, as Rangers, aided by the first-team experience of the Morgan twins on the wings and half-backs Sibley and Hazell, were the first to overcome the initial attack of nerves and soon settled down to play some good football.

Left-half Frank Sibley showed perfect understanding when his low pass was perfectly placed for Roger Morgan to run on to and hit the ball across the Spurs area.

Then twin brother Ian Morgan hit a scorching shot from the right-wing and seconds later appeared on the left to confuse the Tottenham defence.

It was all Rangers at this stage. Roger Morgan, after some tricky inter-passing with Colin Parker, brought another fine save out of keeper Skeet, although his chances of scoring would have improved greatly had he taken the ball closer before shooting.

Spurs threatened occasionally with the left-wing pair of Jordan and Mail, and Rangers’ goalkeeper Brooks left his goal to make a courageous, diving save following one of Mail’s centres. But mainly the first-half belonged to Rangers.

A goal had to come and minutes before the interval the inevitable happened.

Right-back John Blake took a free kick and dropped the ball near the far post, as inside-left Adams managed to keep the ball in play and turn it back into the six-yard area where Colin Parker pushed it into the net.

Rangers led until the interval, but only seconds after the re-start Spurs snatched a dramatic equaliser. Inside-right Johnson streaked through on his own, and Brooks could only get a hand to the inside-right’s shot as it slithered into the net.

It was then that the battle really warmed up. Ian and Roger Morgan tried several long drives that dipped dangerously over the bar and Tony Hazell surged down the right-wing and dropped a delicate lob over the goalkeeper’s head, only to see it rebound from the crossbar.

Rangers took the lead again in the 49th minute. Spurs’ keeper Skeet dropped a simple ball at the feet of Parker and then grabbed him by the ankle as the inside-right dribbled past him and prepared to shoot into an open net.

It was a blatant, almost comical foul and Tony Hazell lashed the penalty past Skeet so hard that the ball bounced out again from the back of the net.

Now Spurs really had their backs to the wall and Skeet was constantly called upon to snatch the ball from the feet of the advancing forwards.

In the 83rd minute the game was thrown wide open again when Spurs grabbed an equaliser. Tony Want dropped a free kick into the penalty area and outside-right Stephen Pitt rose above the defence to head a brilliant goal.

The goal seemed to revitalise Spurs, and as extra time began Rangers started to fade, and on two occasions only John Brooks’ fine positional sense kept his side out of trouble.

Ten minutes after extra time started an incident occurred that swung the game irrevocably in favour of Tottenham. Rangers’ left-half Frank Sibley, who had played a fine game, was spoken to by the referee on the far side of the field.

It seemed to be a trifling incident and when Sibley walked off and stood on the touchline little notice was taken of him.

However, it turned out that he had been sent off, and it was a decision that marred the whole game. Still, the decision stood, and Rangers were reduced to 10 men with 20 minutes to go.

Tottenham immediately launched themselves against a determined home defence. Right-winger Steve Pitt squirmed past Finch with a dazzling display of footwork and his shot thudded against the bar with Brooks well beaten.

Inside-left Jordan was pulled down outside the penalty area as the weary Rangers players struggled to earn the Cup that had seemed to be within their grasp. Rangers dug down into a reserve of courage and energy and somehow survived those last few minutes.

At the end of the game, 22 soaking wet and exhausted players were presented with their medals by Mr Bill Hicks, Sports Editor of the Daily Mail, and given a rousing cheer by the crowd.’

In the final league home match programme on 23rd April, the “Club Notes by Ranger” stated: ‘Tonight’s match with Exeter City marks the end of an era in Queen’s Park Rangers’ history.

This is farewell to first-team football at Loftus Road, for the next time we take the field in search of league points we shall be at our new home at White City.’

It never happened of course. I had been taken to the White City by my dad on the previous occasion a few years previously and remember having mixed feelings at the time about moving there again.