The first series has already been featured and this particular card of A. Nicholls is the fifth from the second series that was issued during 1908.

On the reverse side of the card it reads: ‘A ripe, full flavoured Pipe tobacco, fine cut. In a good well-seasoned briar or a well-coloured meerschaum it will be found an admirable tobacco.’ 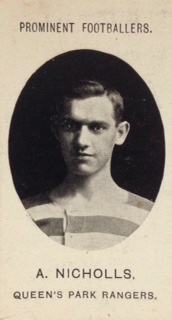 I have found few details regarding A. Nicholls. However, there was a goalkeeper named ‘Arthur Nicholls’ who appears to have started his career at Port Glasgow.

He may well have joined the Rangers in 1907, but he didn’t make his 1st team debut until some years later on 20th January 1912 against Watford.

Arthur’s last match for the Rangers was against Watford on 25th April 1914.