The following article titled: ‘Tycoon Terry’ was written by Alan Hubbard and appeared in World Sports magazine in January 1964:

‘Sipping tea in the lounge of his home – a modern mini-mansion in Willesden, North-West London.

Terry Downes once told me: “I think there might be a few quid in the betting-shops lark.” Two years and nearly 30 betting shops later, “Terry the Tycoon” reflects that he has amassed considerably more than the “few quid” he at first envisaged.

At the last count Terry Downes Ltd. had made a working profit, with all expenses deducted, of £87,000 on the last financial year. Downes rolls his tongue round the figure with justifiable pride.

His licensed punting premises, which neon his name at a score of specially-selected wager-hungry spots in North and West London, have set him up for life.

His name now means something in the City, where, in 1963, he became a public company with assets at around the half-million pound mark. He is a club-owner, too, with a fashionable establishment in unfashionable Harlesden.

Yet this irrepressible personality with a punch has not changed from the man I took tea with two years ago. Then he was Middleweight Champion of the World and the biggest crowd-puller in British boxing. Now I was talking to a comeback-making cruiserweight with the same, undented, genuine love for the fight game.

The Cockney bonhomie was still there, fronting a shrewd business brain that has helped bring him and his partners – manager Sam Burns and cousin Pat – a fortune.

A few things have changed in his environment, of course. He drove a Vauxhall Cresta then; he has a Rover now. Terence junior, now a sprightly 18-month-old, has joined four-year-old Wendy and prized boxer dog “Champ” in his happy household.

Wife Barbara does not change, however. She has always wanted her husband to quit boxing, but never says so because only Terry can know when he is ready.

“It’s like this,” Downes has so often explained to puzzled enquirers. “I’ve been boxing since I was 13 – that’s 14 years ago. It’s kinda hard to break the habit. You get yourself used to a routine and you get to like it.”

“I gave it up for a while to look after my dad when he was ill. He and my wife kept on at me to pack it in altogether, but I found that I missed boxing so much that I couldn’t sleep at nights – couldn’t get me nut down at all. I just wasn’t tired. I don’t know whether it was mental or physical, but I used to lie awake at nights until one and two o’clock in the morning.”

“I just had to start again. My father didn’t want me to, my wife didn’t want me to – no one wanted me to, except me. And anyway it’s me that has to take the punches. I’ll know when I’ve had enough…probably when someone hits me on the chin.”

“I know I’m not the greatest boxer in the world, and never have been, but I’ve always trained hard and kept myself fit to give the public 100-per-cent effort.”

When you want to learn something about the 27-year-old Downes you just let him talk. This he loves to do, for he is the most professionally accomplished boxing figure I have met in this respect.

Not for him the petulant rantings of Cassius Clay. In his Cockney-American drawl, well interspersed with epithets, he spouts straightforward, honest-to-goodness opinions.

Like…”the great thing I learned from the boxing business is never to let anyone make a mug out of you. It happened to me once, when I was a bit raw; only had a few fights. This promoter fella rings me up and tells me that he’s got me a fight with either of the two top middleweights. “

“I jumped at it. Should have realised I had a great choice…being shot or being hung! I got a beating and £2,000. Two thousand pounds! Preliminary fighters get that at Wembley these days.”

“It’s a bit different now. No one takes me for a ride money-wise. Me and my manager Sam Burns are pals and partners. We have a bit of a bust-up now and again – who doesn’t? You have a row with the missus but it doesn’t mean anything. It’s just like that. So we get along fine.”

“But he knows that I don’t really need a manager. Once I heard Sam tell someone that he doesn’t manage me – I manage him!”

“Being British champion doesn’t hold any glamour for me anymore. Once you win the title the Board of Control become your manager. They tell you who and when to fight. I’m not being pushed around like that anymore. I can have an argument with Sam Burns, but you can’t have one with the Board.”

This last statement reflects the rancour that Downes feels because he was stripped of his British middleweight title by the Board for failure to defend it within a stipulated time.

It was this, plus the loss of his world title to Paul Pender in biased Boston that made 1962 a fistically unhappy year for Terry, but his pugilistic panache never faltered and despite his increasing business activities he was a ringside regular at most tournaments.

You could always find him at Wembley Empire Pool…or even Wembley Town Hall. He’s a fight fan, and that’s the secret of it all.

For me, the vital enthusiasm that Downes has for boxing was under-lined at the Royal Albert Hall recently when, ten minutes after knocking out Rudolph Nehring in his cruiser-weight comeback, he had showered and dressed, and was back in a ring-side seat roaring encouragement to down-the-bill fighters.

A far cry indeed, from the majority of star performers who just collect their money, sign a few autographs and make an unheralded exit.

Spend a day with Downes, as I did, and you can see how he savours the atmosphere of boxing, from fight talk to fanfares. Boxing runs in his blood stream and each training session is a daily transfusion.

Few fighters train as hard – or as regularly – as Downes. His day begins with an early morning drive to Parliament Hill Fields for roadwork over the undulating Heath. He is usually accompanied by “Champ” and a spar-mate whose main job, it appears, is to act as foil to the constantly quipping Downes. 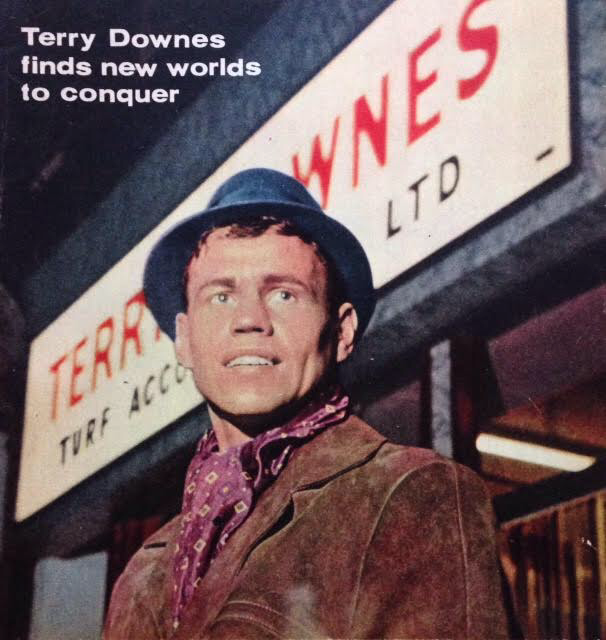 Ski-capped and swathed in towels, Terry relaxes before going home to breakfast and beginning a tour of his betting shops. “In this business,” he says, “You don’t trust anybody.”

“We run the shops like an army. I’m the general, so now and again I nip round and have an inspection. You’ve gotta be sharp to be up to the dodges of some of these punters, but we have a pretty good checking and security system which has seen us all right so far.”

Downes “played a hunch” when he invested some of his considerable ring earnings into his first betting shop at Harlesden. “I was in the second-hand car business then but the bottom was falling out of it.”

“I just had an idea that betting shops would pay off. I didn’t know anything about them – no one did, ‘cos they were something new. But the first one went like a bomb. Everything started from that. Sam Burns had opened one, too, so after a while we got together. We’ve got big plans for the future.”

“We get a lot of opposition, of course, mainly from people who have just one shop in an area where we open one of ours. But I tell them: ‘I only had one shop once, and I still would have if I did nothing but object to the progress of others.’”

For a boxer with a six-year professional career behind him, Downes has a fantastic business acumen. He learned the bookmaking business with astounding thoroughness, sifting every aspect as he would the record of a would-be ring opponent.

His afternoon is divided between gym-work (sparring, skipping, bag-work and exercises) and more trips to various points of his business domain – “I’ve also got a few property interests here and there, but they’re more trouble than they’re worth. What with rows between tenants and one thing and another, some people don’t deserve to have a home,” grumbled Downes the landlord.

In the evening Downes sometimes takes time off to go to a fight or spend a couple of hours at “Terry’s Club”, a smart roulette-drink-and-dance establishment that he opened.

“Sure, I have a few beers,” admits Terry: “You can’t keep sweating in training and not put anything back, can you?”

Sometimes he wears a dinner jacket, but more often than not he sticks to his favourite casual wear – a snap-brimmed Sinatra-style trilby, tie-less sports shirt and suede coat. “It’s the gear I feel most comfortable in.”

Downes also has a racehorse – named ‘Terry Downes’. “Everybody keeps asking me what it’s like, but I’ve never seen it. It’s down at Newmarket being trained. I just hope it’s got four legs and an ‘ead like the others. But it’s nice to be able to put something back into racing, which has given me a lot.”

It is no use us asking anymore why a man with so much as Downes still loves fighting. Even his wife, who attends every contest, but buries her head in a programme every time he steps between the ropes, cannot answer that.

He just has a remarkable affinity for the sport and a joie de vivre that refuses to be dulled…either in boxing or business.

I asked him if, when he began his boxing career, he thought we would now be calling him “Tycoon” Terry. He replied: “This is going to sound big-headed, but I always knew, right from the beginning, that I would do well. If you can’t convince yourself that you’re good, then how can you convince other people?”

The Terry Downes story is a classic example in dedication to personal progress, which others, not only in sporting spheres, would do well to follow. Budd Schulberg could have characterised him as a pugilistic Sammy Glick. If you knew ‘What Made Sammy Run’ then you would also know ‘What Makes Terry Tick’.

His name is etched in the annals of British boxing. Fortunately, when his fighting career is finished, Terry Downes will still be on his feet financially. He will surely end up a millionaire. Want to bet…?