The following article appeared in the West London Observer on 14th May 1915:

Probably the most riotous doings in the district were those which were enacted in Askew Road, where the smashing up of the facades of two different establishments went on simultaneously. The premises in question were both bakers’ shops.

Outside both these places the crowds were particularly dense, and the fury with which they assailed them was most marked.

Several mounted constables, including a large number of additional policemen and 15 members of the special constabulary, under Councillor R. T. Saffell, were hurried to the scene, but their presence did not deter the crowd from wreaking their vengeance on the two establishments. 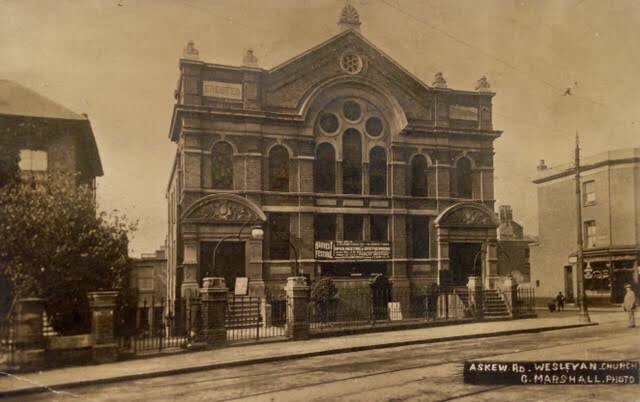 (The above postcard is from my collection and dates from around the time. It shows the Wesleyan Church that was situated on the corner of Askew Road and Bassein Park Road)

The windows of the two shops were speedily reduced to ruins with the use of bricks and heavy sticks, and, this accomplished, the wrath of the breakers seemed to be appeased, as they made no serious effort to force their way into either of the buildings, but it was well past midnight before the thoroughfare again resumed its normal appearance.

Yesterday, both the shop fronts were boarded up, and from a notice now attached to the premises of Faubel, the business appears to have been purchased by a Mr F. Bowley.

Affixed to the door of the premises, 83, Askew Road is the notice: “We are Russian”.

With the outbreak of war, there was said to be an estimated 53,000 German people around the country.

Anti-German hysteria was whipped up in May 1915 following the sinking of ‘The Lusitania’.

On the 11th and 12th May, large mobs gathered right across London and targeted many German homes and businesses.