We got rattled early on, by a side who closed us down, got at us and took no prisoners. We lost our composure and never really recovered, albeit a better second-half.

It showed the frailty’s of a side with a defence that looked uncomfortable on the ball, reverting to route one.

The front two players once again flatter to deceive, whilst the midfield predictably showed true quality, with the wide players now making a contribution after Ollie changed it in the second-half.

Had Millwall not been rightly reduced to ten men, I doubt that we would have got anything out of the game.

That said, we fought back well…we don’t know when we’re beaten, which was a real positive.

On another note…another keeper…another yellow card for time wasting…another ref who hasn’t got the balls to give him a second yellow and send him off whist he continued to waste time after the first yellow!

Truth is that a yellow is not a deterrent. Red card them, they are cheats who treat fans with utter contempt. One red card will kill it overnight. 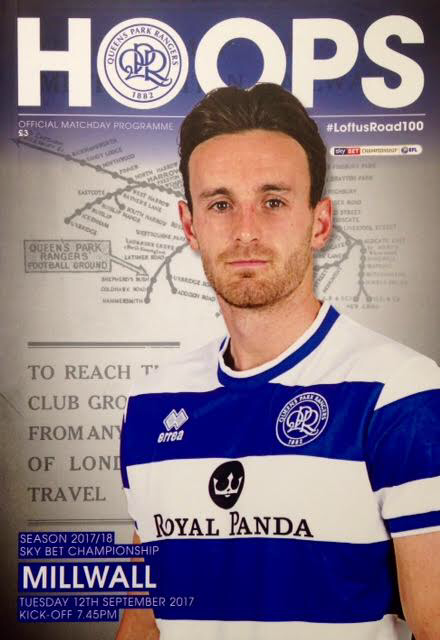 Substitute Matt Smith scored an 85th minute equaliser as QPR came from 2-0 down to draw with ten-man Millwall.

Conor McLaughlin gave Millwall an early lead with a half-volley which found the top corner from a narrow angle.

Lee Gregory was dismissed for a two-footed challenge on Josh Scowen on 41 minutes before Jed Wallace blasted a shot through Alex Smithies for 2-0.

But Massimo Luongo smashed in from a corner and Smith reacted fastest when he swivelled and fired in for a point.

QPR came into the game unbeaten in their past seven home games against Millwall in all competitions and they turned the game around in the second-half to extend their run over the Lions.

Millwall goalkeeper Jordan Archer was in excellent form and looked to be earning Neil Harris’ side the points when he made good saves from Luke Freeman, Luongo, Scowen and Smith.

However, QPR, who had 14 shots on target eventually made their numerical advantage count, with Luongo hammering in from a corner and Smith finding the bottom corner after a cross was not cleared.

It could have been all three points for the hosts, but Smith had earlier missed two great chances, while Conor Washington struck the bar from a rebound and Freeman’s last-gasp free kick clipped the woodwork and went over.

QPR manager Ian Holloway: “Normally QPR would fold, but I’m really pleased we stayed solid and understood where the spare man was. We didn’t just launch it.”

“My bench is so strong these days that I can cause anybody problems, so if it’s not working then keep going and keep believing and I’ll make some changes.”

“There’s some belief that we’ve got attacking options and if I use them we might get back in almost every game. The boys are actually disappointed that we didn’t take more of the opportunities we had. We felt we should have won.”

Millwall manager Neil Harris: “It’s a great point. Of course it’s tinged with disappointment as we were 2-0 up, but the performance was outstanding.”

“We were hanging on, there’s no two ways about it. It was wave after wave and we just couldn’t see it out.”

On Lee Gregory’s red card: “I thought it was really harsh. We’ll certainly be appealing. In a London derby there were tackles flying in.”

“It was a 50-50 ball and both players were diving in – I didn’t even know which way the referee was going to give a foul. Both feet were on the ground.”

Millwall hit the crossbar in the first minute, managed at least three free headers, had the best of the first-half and they really should have been further ahead despite being a man down after 41 minutes.

They went very close when a lob finished just wide of the far post with Alex Smithies stranded way off his line.

That said, Rangers did create some very good chances and Conor Washington did hit the post.

There was no continuation from Saturday’s excellent performance as we looked laboured, lacked movement and were at times clueless. We reverted to the bad old ways of passing nervously sideways and backwards.

However it did eventually change after the break when we started to take advantage of the extra man. But the Lions went 2-0 up after another angled shot squeezed in with the defence all over the place.

The last 25 minutes or so was mainly one-way traffic and I thought that Sylla did really well after he was introduced with his movement and application.

Massimo Luongo pulled one back with a perfectly drilled strike in the bottom corner and in the 85th minute Matty Smith equalised.

Jordan Archer made some excellent saves and the R’s did hit the crossbar from a free kick, four minutes or so into the five added.

A very disappointing crowd of 12,600, but Rangers fans were in very good voice whilst the visitors spent much of the game abusing Ollie!