Former R’s player Stanley Hudson was born in Fulham on 10th February 1923 (and not in 1924 as stated in my previous article on Stan). He later lived in Stebbing Street in Notting Hill.

The match was played at the Paddington Recreation Ground on Bank Holiday Monday, 6th August 1951. The souvenir match programme was kindly photocopied for me:

‘The Essendine Old Boys’ Cricket Club….for whose funds this match was originally to have been played, on learning of the sad death of Stan Hudson, at once expressed the wish that all proceeds should instead be devoted to the Trust Fund which has been set up by Queen’s Park Rangers Football Club, for Stan’s young son.

The Organising Committee wishes to express its deepest appreciation of this gesture and to venture the belief that you will assist the growth of this Fund to the limit of your ability.

Many of you will wish to make donations and we can assure you that any amount, however small, will be most gratefully received. 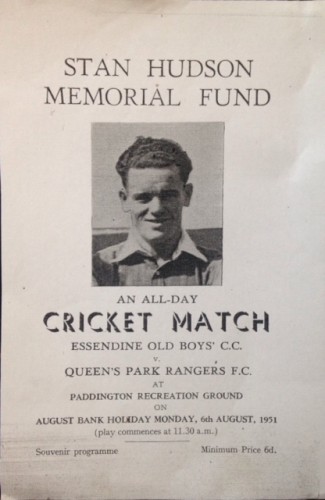 According to the programme the Rangers were 64 for 4 at lunch with Bill Heath making 14 runs, Albert Smith was stumped for a duck, Reg Saphin was caught off the bowling of Jim Smith for 18 and Des Farrow was also stumped after he had made 25.

The following obituary appeared elsewhere in the programme:
‘Stan was a local boy. His early life was spent in the streets of London, like so many of us. His discovery by the Rangers makes an interesting story.

During the War, Stan served his country in khaki. Also during the War, manager Dave Mangnall and Alf Ridyard of QPR were serving in the Police Force in the Hammersmith area.

One day, whilst on patrol duty, they noticed a young fellow in Hammersmith Broadway, and as a matter of routine, decided to question him.

Stan was soon able to convince the “arm (s) of the law” that his papers were perfectly in order and that he was on a perfectly genuine “leave”. Not only that, he was able to convince Dave and Alf, that he could play football too – and that was the commencement of Stan’s career with the Rangers!

He was a lively and popular figure with the crowd and next to no time, was awarded the affectionate (if somewhat obvious!) nickname of “Soapy”.

He played in many first team games and we all remember the quick “turn-and-shot” which was peculiarly his own. He had plenty of “guts” and shirked no tackle, and invariably came out with the ball.

Stan was 28 years of age. He had been ill for some time, but bore this illness uncomplainingly and very courageously. His untimely death was a big shock to all that knew him.

He was indeed a good fellow and in the words of one of his player colleagues: “He was one of the nicest fellows I’ve ever met – also one of the most popular. He was great company to all the lads whenever he came away with us.”

This sums up the feeling of us all so well that there seems little else to say,’

The raffle prizes were to be awarded as follows: A cricket bat autographed by many famous County players, a match football autographed by all the Rangers players and a basket of fruit.

Stan had made his Rangers 1st team debut against Brentford on 9th October 1948 and scored one of the goals in the 2-0 victory. He went on to make a total of 24 appearances and scored 8 goals.

He was buried in Hanwell.