The following article comes from a 1927 daily newspaper:

‘At the West London Police Court yesterday Mr Marshall heard the summons taken out at the instance of the National Anti-Gambling League against a bookmaker named Harry Kirby, of Ladbroke Grove, Notting Hill, for having on four days in September:

“At a certain place at the Stadium, White City, Shepherd’s Bush, unlawfully used the same for the purpose of betting with persons resorting thereto upon certain events and contingences relating to certain greyhound races contrary to section 3 of the Betting Act, 1853.”

Mr Comyns Carr, opening the case, said that the facts which he would put before the Magistrate would, in his submission, show that the manner in which these premises were conducted by the defendant company was such that the whole place might properly be regarded as being kept and used for the purpose of a vast number of bookmakers, of whom Kirby was one – chosen not for any particular delinquency on his part at all, but simply as an example – for betting with persons resorting there.

The whole of these premises constituted a place open, kept, and used for that purpose.

After describing the arrangements for starting the dogs, counsel said that the time occupied by the races themselves was amazingly small.

Of the two hours or so during which the public were present, on one occasion the period occupied in the whole of the six races amounted to three and three-quarter minutes.

The rest of the two hours was occupied mainly by the thousand or so bookmakers shouting the odds for coming races and members of the public putting their money on.

Mr Carr read notices posted at the White City, which were important, he said, as showing how far the company organised and maintained control over the proceedings of the huge number of bookmakers who carried on business on these premises.

Concluding, counsel said that the way in which these premises were conducted left no possible doubt that the management themselves organised and controlled the whole of the betting there.

They permitted each bookmaker to occupy his particular post. They authorised and permitted the proceedings, and they supplied facilities for the use of bookmakers, which could be used for no other purpose than for the carrying on of the bookmakers’ business. 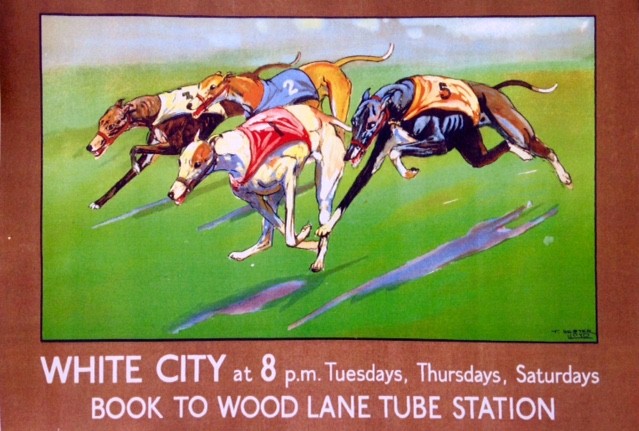 The Evidence:
Mr John Gulland, honorary literary secretary of the National Anti-Gambling League, was called as a witness. He said that he attended the White City on several occasions.

On September 17 he bought there an official card with the name of the Greyhound Racing Association printed on it and giving details of the races. The cards were sold at booths, and by men wearing caps bearing the word: “Official”.

He also bought an official formbook, which was sold in the same way. The result and starting prices were chalked up by someone wearing an official badge after consulting with some of the leading bookmakers.

There was a notice at the turnstiles, “No betting will be allowed in the stands. By order of the Committee.”

Mr Comyns Carr: Did that order appear to be observed?

Mr Gulland: In the half-crown stand so far as I could see there were several hundred bookmakers with posts. There was a painted board inside the ground with the notice:

“Only those bookmakers in possession of official badges are authorised to bet on this course. By order of the Committee.”

That board was there on every occasion I visited the ground until October 3, when it had disappeared. That was subsequent to the issue of the summonses.

Cross-examined Mr Gulland said that he had visited racecourses near London – Epsom and Kempton Park – and also in the North of England.

Questioned as to the manner in which betting was usually carried on, on horse racecourses, he agreed that the bookmakers had posts.

In re-examination, he said that, with the exception of the posts being fixed at the White City and temporary at horse races, he saw no difference. He had, however, never seen at horse-race meetings lists with marks on them such as the red badge mark on the lists at the White City.

Have you ever seen notices such as these you describe relating to bookmakers and their conduct posted at horse-race meetings?

I have never seen any notices relating to the way in which betting should be carried on or as to the regulations regarding bookmakers.

The Defence:
Sir Travers Humphreys said his submission was that the question to be determined was a very small question of fact only. People have apparently thought that the issue was whether betting at the White City on greyhound races was legal or illegal.

In his submission no such question arose at all. The only question that was raised was whether betting was in fact carried on in the month of September at the White City as betting carried on in such a way as to contravene the law.

The Greyhound Racing Association had not the smallest desire to break the law, and if in the Magistrate’s view of the question of fact the particular regulations which they had made under which betting might be carried on contravened the law, he (counsel) was sure that he would be satisfied that they had erred inadvertently.

Dealing with the question as to whether bookmakers should stand on boxes, Sir Travers said it was desirable that they should stand on something, so that a man who wanted to bet with “Old Joe” or “Old Harry” should know where he was standing.

If the Magistrate decided that there had been an offence, it would simply mean a slight alteration in the regulations fixed by the Greyhound Racing Association. Mr Comyns Carr was not called upon to reply.

The Magistrate, in giving his decision, said that in his opinion Mr Kirby and other bookmakers, by attending night after night at the same post with their names on it, and conducting their business there, clearly localised their betting in such a way as to infringe the law.

He proposed to deal with the two cases against the G.R.A. as being alternatives, and in these circumstances he would find them guilty of permitting the place to be used by Mr Kirby and other bookmakers for the purpose of carrying on their betting.

The Greyhound Racing Association, Limited, would be fined £50, and must pay 100 guineas costs.

As regarded Mr Kirby, he looked upon him as more or less an innocent offender, and proposed only to impose a nominal fine of 20s in his case.’