I was surprised to see that three games were scheduled for last Saturday. The first team were involved at Peterborough and a U23’s squad were playing Wycombe Wanderers behind closed doors at Harlington.

Bovingdon provided the opposition in the third match, which also involved an U23’s side. So I opted to make the trip to Green Lane in deepest Hertfordshire. 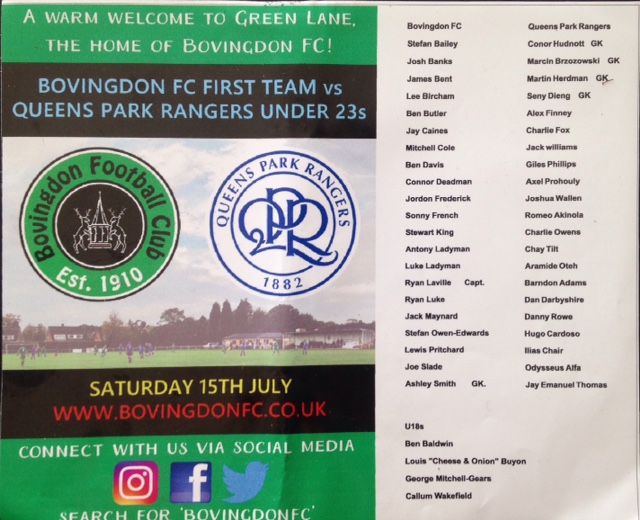 The R’s took the lead after 5 minutes through Matthias Fanimo after some good work by Jay Emmanuel-Thomas.

The home side were creating some good opportunities. A free kick flashed just wide of the post and they had the ball in the net, but it was ruled offside.

Dieng made a good stop after facing the Bovingdon player one-on-one, which resulted in the ball drifting wide, of the far post. Although the ball was well over the bye-line, an R’s defender swept it away, and the referee decided to award a throw-in!

Stefan Bailey was put through and he shot just wide, whilst at the other end, the Bovingdon keeper made a very good save from Jay Emmanuel-Thomas.

Matthias Fanimo forced the home keeper to knock the ball over the bar for a corner and on 27 minutes the R’s doubled their lead courtesy of an own goal.

Hugo Cardoso scored the Rangers third goal, when he slotted the ball low, into the corner of the net.

Three changes were made for the 2nd half; Genovesi, Corner and Bettache all made way for; Ribeiro, Bansal-McNulty and Mesias respectively.

QPR added a fourth goal around the hour mark following a run through midfield and Romeo Akinola’s shot skidded into the corner.

A number of further changes ensued which saw Bowman replacing Dieng in goal, and also the introduction of; Miller, Francis-Adeyinka and Dauti,

On 66 minutes, Amrit Bensal-McNulty scored an outstanding goal with a wonderful solo run which saw him beat at least four players in close proximity and the home fans joined in the applause.

Four minutes later Lukas Corner was sent on again at the expense of Jay Emmanuel-Thomas. My Swedish R’s mate, Simon, later informed me that the young winger was with Division One (third tier) club Utsikten, who are based in Gothenburg.

In the closing stages, Myles Bowman denied Bovingdon a goal when he took off to make a superb full-length save.

As for the journey home, the last 352 bus had departed so I headed towards Chipperfield. There was a sign at the village for Kings Langley so I walked on.

Eventually and to my surprise (and to his), Lee Bircham pulled up and offered me a lift. He kindly dropped me off close to Kings Langley Station.