The front cover features ‘The Goals of Jimmy Grant’ and continues on to the next three pages. 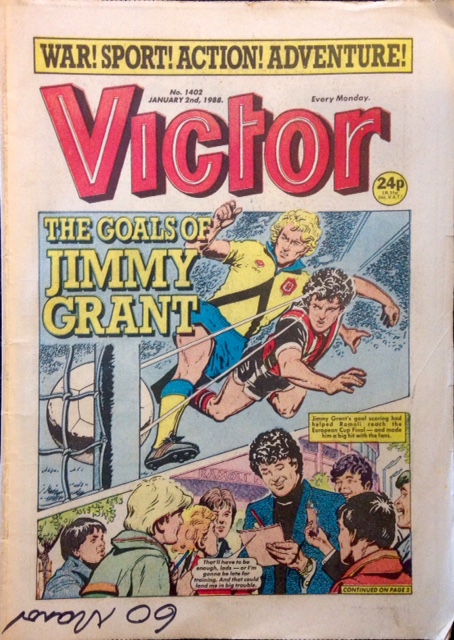 Next up is ‘Space Hunter’ – Tebor, a criminal from the 31st Century, had travelled through time to our present day. Santori, a hunter android, had been sent to track him down. Santori had teamed up with youngster Tim Price, but Tim had been kidnapped by Tebor’s men. After a violent struggle, Santori and Tebor landed in the sea.

This is followed by ‘Sport Crazy’ with Ballboy and ‘Underground Airforce’.

Then it’s ‘Lady Luck’ – Who is trying to kill the number one killer? Chicago in the late 1920’s. When Senator Farnham plunged to his death, everybody thought it was suicide….

‘Cadman of the Legion’ follows – In 1918, Captain Gerald Cadman, VC, known by Corporal Tom Smith as a cowardly rogue, was serving along with Smith in the French Foreign Legion in Morocco. To avoid capture, Cadman had been forced to disguise himself as a German officer helping Moor tribesmen who had set up a deadly ambush for a Legion column…

Next up are ‘The Cat Burglar’ and ‘You’re In The Navy Now!” 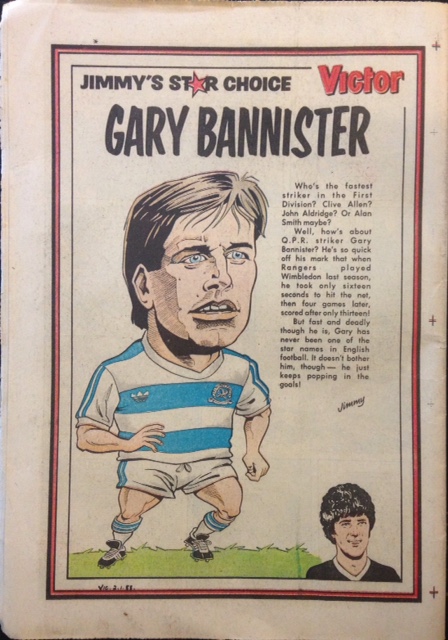 And finally Jimmy’s Star Choice on the back page is Gary Bannister: ‘Who’s the fastest striker in the First Division? Clive Allen? John Aldridge? Or Alan Smith maybe?

Well, how’s about QPR striker Gary Bannister? He’s so quick off his mark that when Rangers played Wimbledon last season, he took only sixteen seconds to hit the net, then four games later, scored after only thirteen!

But fast and deadly though he is, Gary has never been one of the star names in English football. It doesn’t bother him, though – he just keeps popping in the goals.’