Hoolahan found the bottom corner from the edge of the area to put the hosts in front midway through the first-half.

The 34-year-old set up Alex Pritchard to volley in a powerful second and Josh Murphy to squeeze a low finish in under QPR goalkeeper Alex Smithies. The midfielder then wrapped up the win in injury time with a finish into an empty net from Cameron Jerome’s pass.

Hoolahan won the Canaries’ player of the season award and the fan favourite completed another memorable season with a stellar performance, albeit against a QPR side who have now ended their campaign with seven defeats from their last eight games.

He cut through the away side’s defence in the 22nd minute, firing a left-footed shot into the corner after exchanging passes with Nelson Oliveira.

Norwich keeper John Ruddy, playing in his last game for the club, produced an excellent stop to tip Pawel Wszolek’s shot onto the crossbar before the Canaries took control.

Pritchard fired in on the volley after a ricochet from Hoolahan’s pass before Murphy got in behind the defence, held off a defender and beat Smithies at the near post.

Hoolahan completed the scoring late on from Jerome’s pass to see Norwich end the season strongly in eighth place, while QPR finish 18th.

Norwich caretaker manager Alan Irvine: “It was a good way to finish, although I thought we got a little bit sloppy after we had opened the scoring. We had a word about that at half-time and the players went out and did really well after that.”

“The new manager might want to bring in his own people, and I would fully respect that, while he also might talk to me and decide not to take me on.”

“Also I might talk to him and decide I didn’t want to stay. Everything is up in the air at the moment, but I am still contracted to this club and I will now go home and wait for a call.”

QPR boss Ian Holloway: “I am not going to be critical of the lads out there today, because they tried their best, but they were nowhere near Norwich.”

“We were beaten by a better side, a better club at the moment, and we have to accept that.”

“We gave some of their best players far too much room and they could have scored more goals than they did. 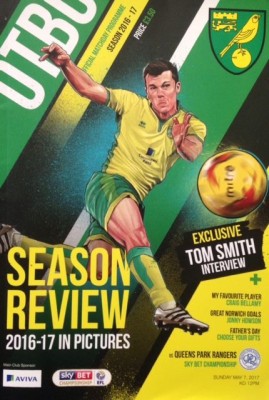 I took the first train out of Northolt Underground Station to pick up the 7.30am coach from Loftus Road.

For a 12 o’clock Sunday kick-off, and given most recent performances, nearly 2,000 R’s fans turned out for this final game of the season. However, on the pitch it was generally a shambles!

Perch was getting roasted and within the first four minutes or so, the home side hit the crossbar, we had to clear one off the line and Alex Smithies made an outstanding save!

It was mainly one-way traffic, but just before half-time, Pawel Wszolek fired in a shot that was finger-tipped onto the crossbar.

Generally we gave the ball away too often, our build-up play was far too slow as we regularly ran out of ideas when we approached the half-way line.

Norwich could easily have scored seven or more!

One of the few positives came in the 69th minute when 18 year-old Josh Bowler was introduced for his first team debut.
Well done Josh.