The talk at half-time was of the tactics being wrong, our midfield therefore being over-run and us defending too deep.

So if us mere supporters could recognise what was wrong why couldn’t Ollie, Birch and Fleming?

Derby were there for the taking as they have been so poor recently. Their fans celebrated like they’d won the league at the end, that’s how desperate they were to see a win! It was their second win in 12 and first double over us in 27 years. 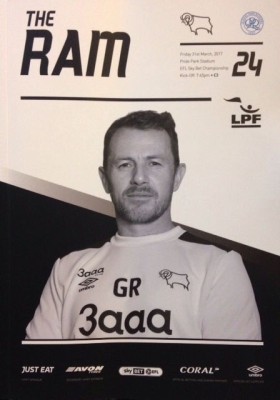 Derby are six points off sixth position with seven games to play.

Idrissa Sylla headed against the post late on for QPR, who suffered only their second defeat in eight games.

Ian Holloway’s in-form Rangers had offered little in attack before that, and they remain 10 points clear of the relegation zone, having taken 16 points from their previous seven Championship matches.

Derby had drawn their first game under Rowell at local rivals Nottingham Forest prior to the international break, coming from behind to lead and then conceding a stoppage-time equaliser.

But they built on an impressive second-half display at the City Ground to give new boss Rowett, a former Derby defender, his first win in charge.

It appeared as if Derby would be punished for their wastefulness, but Czech striker Vydra netted for the second game in succession to secure three points and deny Rangers what would have been only their third league clean sheet of 2017.

A Friday night game live on Sky, but good support from the 563 R’s fans (thought there were more?) and plenty of ‘Wemberlee’ references aimed at the home fans throughout the match.

As for the game, we lined up in a sort of 3-5-2 formation and started off okay, knocking the ball about, but unfortunately that didn’t last very long. We allowed their midfield to take over as we continued to give the ball away.

We created very little, were unable to string two passes together and resorted to long ball, which didn’t work anyway?

That said we could well have gained a point at the death with their keeper making a rare stop from Matt Smith and then Sylla’s header hitting the post with the goal gaping.

The coach journey back took a little bit longer as we had to re-route, but the 140 night bus from the Target Roundabout didn’t disappoint, unlike our midfield, tactics etc etc!

I was surprised to read this comment from Ollie after the game: “When (Bradley) Johnson is detailed to stand in front of Matt, the last thing I’d be doing is choosing to hit it towards him all the time.”

And on Tuesday night’s game he said: “We’ll try other people against Aston Villa – that’s why we’ve been doing well, because we’ve been giving people chances. We’ll go back and start again. We’ll go back to the basics I want.”