Yoann Barbet fired the hosts in front from a Jota corner before the Spaniard doubled the lead from the spot after Maxime Colin was fouled by Joel Lynch.

Lynch then pulled a goal back by heading past keeper Daniel Bentley. But Jota restored the Bees’ two-goal advantage soon after as he beat two players before firing low into the net.

Lasse Vibe had gone close to opening the scoring early on when he turned his way past Nedum Onuoha, before firing the wrong side of the post.

Lynch was then denied by Bentley at the other end, before Barbet drilled the ball into the ground and over keeper Alex Smithies, to give ninth-placed Brentford the lead.

QPR, who are five points above the bottom three, but not yet safe from relegation, were unlucky not to be level at the break with Matt Smith’s header being turned away by Bentley and Massimo Luongo hitting the bar from 30 yards in added time.

The visitors thought they had an equaliser when Barbet cleared Conor Washington’s effort off the line, but the Bees then claimed their second of the afternoon as Jota fired in from the spot after Lynch brought down Colin in the box.

Brentford boss Dean Smith: “We know what we are about and we get our heads down and get on with our job.”

“People will always have opinions but all we can do is keep working hard. Results like this mean we can go about our jobs with smiles on our faces.”

“It was a comfortable and fully deserved win without us ever really getting near our usual levels.”

“I told them to have clarity about what they do, to have clear heads and no ill-discipline and not to let emotion get involved in the game. They did that.”

“We deserved to win but we weren’t perhaps as clinical as we have been.”

QPR manager Ian Holloway: “We need to think clearly under pressure and we have to get back to doing that every week.”

‘We have to dust ourselves down, start again and find a way of playing that’s nailed down.”

“Brentford played well, I hate to say it, but now it’s about how much you care and how you do it.”

“Six games ago we were top of the form table and since then we’ve had one win to get and we still need it. For me it’s simple. We have to draw or win next week.”

“We still have work to do. Anyone who is a real QPR fan has to take this one on the chin with dignity because we have to come together to beat Forest.” 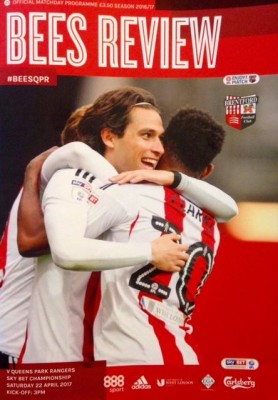 After the cramped conditions of the upper tier on my previous visit, I took to the terracing on this occasion.

Looking at the starting line-up, why no Wszolek was one general thought? And talking of wingers, I for one would liked to have seen Shodipo remain with us.

Brentford were given far too much space down both flanks and at half-time were 1-0 up. Barbet had bounced the ball into the net following a corner.

Yes we had gone close a few of times before the break. Massimo Luongo had hit the crossbar from over 25 yards and a Matt Smith header forced a full-length save from the Bees keeper.

But overall it had all looked a bit of a mishmash, sloppy and uncoordinated. Sean Goss was pretty much anonymous and LuaLua later replaced him.

On the hour mark, Joel Lynch flew in and gave away a penalty, but he pulled a goal back with a superb header.

Brentford scored their third a couple of minutes later when Jota cut in from the right. He eased his way into the box, past two defenders, and placed the ball into the net.

Although Conor Washington had his effort cleared, we all thought that the ball had crossed the line and those fans standing right down the front had an even better view of it!

LuaLua went on a great run down the left and he put a lovely ball over for Smith and Sylla also had a very good opportunity late on. But I have to say that Brentford deserved their victory.

Many fans had gradually departed and of those remaining, some booed at the final whistle. I noticed Ollie exchanging words with some fans as was leaving the pitch in front of them.

I wasn’t too impressed with his post-match comment when he stated: “Anyone who is a real QPR fan has to take this one on the chin with dignity because we have to come together to beat Forest.”

Ollie maintains that he: “Ain’t a tinkerman, I don’t do that. I’m trying to win games.” I wonder what he thinks a tinkerman does then?

And what exactly did he mean when he said about finding a way of playing “that’s nailed down”?

Anyway, one thing is for sure, we will come together on Saturday.