I felt we at last have a team that will build and work as one. The fact that Conor Washington and Matt Smith are scoring puts to bed the whole issue of Jimmy Floyd Hasselbaink and getting more time. It was as I said, then and now, the right thing to do.

And back to the game, we moved it around really well. Conor Washington was outstanding and also a pain to them.

Matt Smith is the player we need and have for a while and that is a target and will hammer the defenders.

I’m really pleased to see Ryan Manning and Darnell Furlong get more and more games and that is one thing we can all agree on I am sure.

We played better against Huddersfield and lost. That’s not a criticism, just putting the game in perspective.

We could’ve been two up on six minutes when Manning chipped the keeper from the ‘D’ but the keeper tipped the ball over the bar. The referee gave a corner this time!!!

Smithies pulled off two top-drawer saves again. Furlong had a superb game, it’s like he’s played there for years, not his twelfth start.

Ned was back to his standard of four years ago and saved his best until the dying seconds when he put in a superb block-tackle three yards out.

Luke Freeman. How did we get him? Bargain buy and what a buy! Two great feet and always wants the ball.

Pawel Wszolek spent most of the game defending and he seemed to play in at least three different positions. Put in a great shift.

Ryan Manning had one of his most difficult games against very combative opponents, but did well and finished on the winning side again. His ninth start in 10 appearances, won 5, drawn 2 and lost 3.

Conor covered every blade of grass, made one, scored one.

LuaLua. MOTM in any language. The amount of times he trapped the ball and within seconds had sped past two defenders. He was a joy to watch. When I first saw him I wasn’t overly impressed but I’ve been proved wrong. 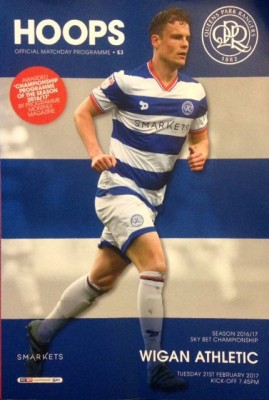 Washington crossed for Smith to sweep in Rangers’ opener from 12 yards, his second goal in two games.

Omar Bogle levelled for the visitors, scoring from the penalty spot after he had been brought down by Joel Lynch.

Washington’s finish from the edge of the area won it for Ian Holloway’s men, who are 10 points above the drop zone.

Wigan, who had taken four points from their previous two matches without conceding a goal, would have moved out of the relegation zone with a win but they found QPR goalkeeper Alex Smithies in excellent form.

Smithies denied Bogle a second goal and kept out Jake Buxton efforts either side of half-time before Washington’s winner.

Having struggled to find the net frequently under previous QPR boss Jimmy Floyd Hasselbaink, the former Newport and Peterborough striker has now scored four goals in six appearances for the West London club.

QPR manager Ian Holloway: “We got an ugly win but the character has come and you can see that the lads are growing.”

“The work-rate is there. They’re all wearing the shirt with so much pride. Even if we had drawn that game I still would have been happy with their effort. I can’t ask for any more from any one of them.”

Wigan Athletic boss Warren Joyce: “They were two poor goals to concede. For the first goal we were wide open to a long kick down the middle. We did well to come back and were good value for the 1-1 at half-time.”

“We were certainly under plenty of pressure from how direct they were. We know the lad (Matt Smith) wins a lot of balls in the air and that we had to get to the second ball.”

“For the second goal we don’t pick the second ball up – its straight through on the back-four. They were poor goals, not goals where you’re carved open. The fitness and desire were there and we could have got an equaliser near the end.”

We got off to the perfect start last night with that early goal. I thought that Conor at one point was going to blast the ball, but he spotted the on-rushing Matty Smith to his right and despite the keeper getting a hand to it he couldn’t keep it out.

Wigan were a very physical side and they were lucky to finish the game with 11 and just the five players booked.

They did come back into the game after the goal and they equalised from a penalty. We went through a brief period when we pumped too many predictable balls up to Matty Smith.

LuaLua looked excellent again and there was a wonderful moment when he spun round his marker and set off down the left wing.

Conor took his goal well when he drilled the ball low to the keeper’s right.

Although we were the better side we had looked a bit ragged at times. That said, it was an intense encounter and the blustery wind was having some effect.

We will always moan about the officials but there were some absolutely awful decisions again last night. The lino on the Ellerslie Road side didn’t award a throw to us despite the ball being at least two foot over the line!

But the worst example occurred when their keeper jumped up and palmed (not finger-tipped) the ball over the bar and Mr Linington awarded a goal kick!!!

Chris Day and Richard Langley were the latest ex-players to be inducted.