Substitute Yeni Ngbakoto created one goal and scored another as QPR came from behind to beat Cardiff City and ruin Bluebirds manager Neil Warnock’s return to Loftus Road.

Sol Bamba’s header just before the interval put the Welsh side ahead. But Rangers levelled when Ngbakoto smashed the ball in after a fine team move and final pass from Jamie Mackie.

Matt Smith headed the winner from Ngbakoto’s corner – the striker’s third goal in four since joining in January.

QPR’s third win in four took them nine points clear of the relegation zone and just three behind Cardiff, but their prospects of building positively on their recent good form looked bleak at the break despite having the better of the first-half openings.

Conor Washington struck the post with the home side’s best chance, but the visitors led through Bamba’s header from an inviting Craig Noone corner.

Kenneth Zohore almost made it 2-0 when his shot had to be cleared off the line by Joel Lynch.

But French winger Ngbakoto changed the game, slotting home the equaliser and then teeing-up Smith’s header to ensure QPR could mark the 50th anniversary of their League Cup win as a Division Three side with a victory.

Queen’s Park Rangers boss Ian Holloway: “Today, honouring the people who are famous to all us QPR people, to have them here and to come out and win, I’m delighted.”

“We came from behind and sometimes you need your substitutes to do it. Yeni’s first goal was a great move and that gave us the impetus to go and get another one.”

“Neil (Warnock) will be fuming, but there wasn’t a lot between us and I did feel our substitutes coming off the bench made the difference for us, and I’m delighted for them.”

“We were 1-0 up and really should have scored two or three goals in the second-half. To then give them a chance is very disappointing.”

“But to get where we are has been fabulous. The lads have really done well for me. We’re looking to next season. I’m learning all the time – I saw one or two things today which is really helping me to decide what I’m going to do at the end of the season.” 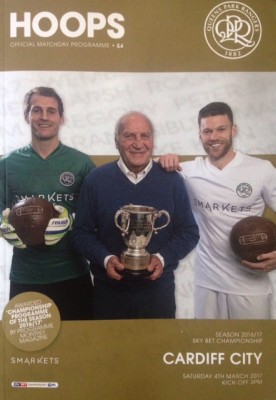 On the 50th anniversary of our historic League Cup final victory at Wembley, and in the spirit of 1967, it was nice to hear ‘Itchycoo Park’ (by the Small Faces) over the PA as I climbed the Upper Loft steps.

It was a lovely gesture by the club before kick-off to allow 97-year-old Harold Havelock to present Conor Washington with his ‘Player of the Month’ award.

As expected the team were kitted out in a white strip and Alex Smithies wore a green jersey, in honour of the ’67 side.

Both teams lined up around the centre-circle to applaud our missing 1967 heroes; Jim Gregory, Alec Stock, Mike Keen, Peter Springett and Jimmy Langley.

Neil Warnock and Matt Connolly were well received but some fans continued to boo Junior Hoilett.

Once again after 10 minutes there was a minute’s applause around the ground for Stan.

It was quite a scrappy first-half, but Conor Washington saw his shot come off the post in the 24th minute. The visitors got their noses in front with a free header just before the break.

Prior to their goal, Alex Smithies made an outstanding save after the ball had been deflected en route by Nedum Onuoha.

‘QPR The Greatest’ blared out at half-time to accompany the players and families who had assembled on the pitch.

First out was Jim Gregory’s grandson, who was followed by Alec Stock’s daughter and grand-daughter. Terry Springett represented Peter, then it was Jim Langley’s grandson and finally on came Mike Keen’s son and grand-children.

Some of the surviving players then followed; Tony Hazell, Frank Sibley, the Morgan twins and lastly Mark Lazarus. Mark spoke passionately about the Rangers fans and the welcome.

Yeni Ngbakoto came on after 58 minutes and it was very noticeable how much leaner and sharper he looked. He equalised four minutes later, following an excellent move.

After 83 minutes, Matt Smith’ s header from Yeni Ngbakoto’s corner went in off of Jazz Richards.

There was another occasion when the ball was clearly a foot over the line on the Ellerslie Road side, and again, the lino kept his flag down!

Barnsley next up on Tuesday night….