Queen’s Park Rangers made it four wins in five Championship games with a clinical victory over Barnsley.

Barnsley’s Angus MacDonald turned into his own net before Tom Bradshaw rounded Alex Smithies to make it 2-1, but QPR held on to move into 14th place.

Ian Holloway returned as QPR manager on 11 November with the West London side in 17th place, six points above the drop zone, but he has turned their fortunes around to guide them away from relegation trouble.

By contrast, Barnsley have now won just one of their last eight Championship fixtures and are 11th, 12 points adrift of the play-off places.

Sylla opened the scoring after seven minutes in bizarre fashion, inadvertently turning in a cross, but the away side responded and threatened an equaliser through volleys from Josh Scowen and Alex Mowatt.

Tykes goalkeeper Adam Davies had to be alert to keep out Ngbakoto’s shot before Perch struck the woodwork with a header from Luke Freeman’s cross.

However, it was Barnsley who had the better chances in the first-half, with Armstrong smashing over and Watkins going close three times – Jake Bidwell’s clearance off the line the closest he came to equalising.

Barnsley were made to pay for their profligacy when MacDonald slid in for 2-1 under pressure from Sylla and substitute Bradshaw’s well-taken goal was ultimately in vain as the in-form hosts saw the game out.

QPR manager Ian Holloway: “I’m very pleased I can make five changes and the team play as well as that. It’s a good feeling in that dressing room. It proves to me that the group are enjoying what they’re doing and have accepted my decisions fantastically well.”

“We’ve rested a couple who will be playing on Saturday and we’re starting to feel like we’re not a bad unit.”

“We had chances in the first-half and were loose in front of goal. It could have been a totally different matter had we got back on level terms.”

“We had chances and you have got to take them. It has to be clinical at one end and ruthless and really tight at the other.”

“In possession we were okay and we created lots of chances, but we didn’t take them and that’s always going to be a problem.” 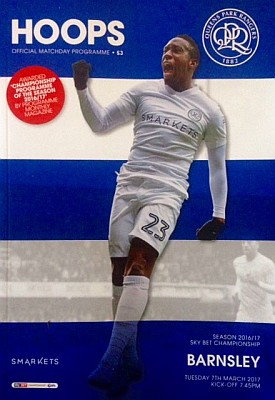 When news of the starting line-up filtered through, much was said about the number of changes (five), but also the fact that there shouldn’t be ‘all that long ball’ again.

We took the lead after 7 minutes with quite an odd goal at the School End. Yeni’s cross was somehow touched/knocked by Sylla, past a bemused Barnsley keeper and to the joy of the Rangers fans!

James Perch struck the bar and Yeni’s well hit, first time shot from the edge of the box was very well saved by the keeper.

The visitors created a number of chances, but some poor finishing denied them a goal. Also denying them an equaliser was Jake Bidwell’s amazing goal-line clearance, which brought Rangers fans to their feet.

Three legends arrived on the pitch during the interval; Don Givens, Shaun Derry and Terry Mancini.

It could well have been 3-3 at half-time, but Rangers had the best of the second-half. We doubled our lead following Pawel Wszolek’s superb run down the right-wing.

He put over a great cross as Sylla and a defender slid together to meet it in the six-yard box and the ball ended up in the back of the net.

Barnsley applied some pressure in the closing stages and the five added minutes came as a surprise?

Overall some good entertainment was served up and the three points were most welcome of course.